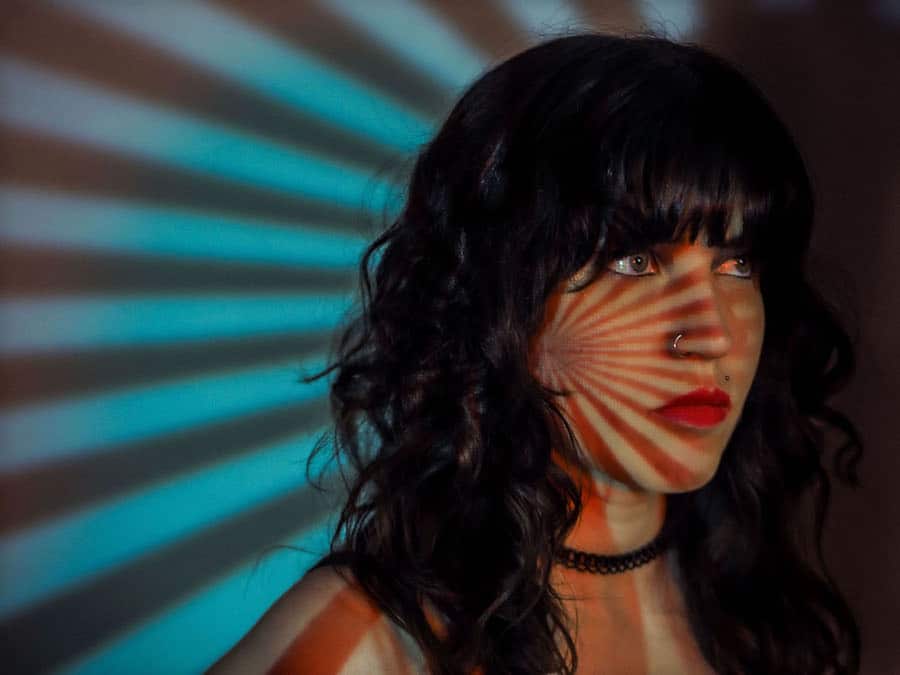 Monica LaPlante has spent the last year expanding the love and support of the Minneapolis music scene. Unlike most people, when Monica LaPlante was laid off during the Covid-19 pandemic, she saw an opportunity. Finally, she had the uninterrupted creative time she’d previously thought possible only for rich kids and artists in movies.

She dusted off her vintage drum machine, grabbed a microphone and spouted her thoughts and fears out which resulted in ‘Compression’, an encapsulation of bottled-up anxiousness and uncertainty set to a 70s Funk bass lines and whacked-out synthesizers.

Monica Laplante has now released a sassy, black, white and red themed video for ‘Compression’ which you can view below. We did a Q&A with Monica all about the song and visuals as well which you can read below.

Hi Monica! How are you? What does a typical day look like for you at the moment?

“I’m great! Staying busy. A typical day for me would start with drinking coffee and watching the X-Files in bed. I guess I want to make sure I’m good and bizarre before I even leave the house. ha ha! Then I walk to the coffee shop to drink MORE coffee and answer emails. Currently we’re recording all of my bandmates’ solo projects, so I’m also listening to mixes on my walks to and from the coffee shop. Then ideally I would practice for whatever show is coming up next, catch up with friends, or do a quick bartending stint by the local baseball stadium. It really sounds like I should have more time in the day now that I’ve listed that all out…hmmm that’s probably just taken up by messing around on the internet.”

You’ve just dropped your new music video for ‘Compression’. What can you tell us about the track, firstly?

“‘Compression’ resulted from processing the world quickly shutting down around us in Covid 19. I really tried to focus on projects that were immediately available to me and challenging enough to distract me from the outside world. It really gave me time to figure out how to program my MXR 185 Drum Computer. Once that was accomplished, the only natural thing was to jam a bassline to it. The lyrics are purely me nervously fidgeting with my current thoughts.”

And what about the visuals? Where did you draw inspiration from for the video?

“The visuals partley started with the black and white Fashion Brand Company jumpsuit I’m wearing. Director/Photographer Areca Roe saw me wearing it at a show and centered the color scheme around it. I also happen to have a black and white striped wall in my apartment. The red household items are all from my apartment as well. That retro bright red is one of my favorite colors. So unintentionally, it’s all an exaggerated bizarro version of me trying to do household tasks in my home.”

What was your favorite and/or least favorite part making the video? Any BTS stories to share?

“My favorite part of making the video was just gathering my creative and talented friends together in one room. It was just me, director Areca Roe, the band (Drummer-Austin Cecil, Bassist- Christy Costello, Guitarist/Keys-Orion Treon) and our manager Noah Hollander. I love having a small group of people who I can creatively trust and are comfortable being around. That’s when the best ideas come about.

“Behind the scenes-wise, the phantom hand claps are Austin and Orion. There are a few outtakes where they are a lot closer to me than it looks. It was very similar to being a little kid and the annoying playground peer is hovering near your face, tauntingly reminding you “I’m not touching you!” So it was very difficult not to slap them. I think that’s why Areca ultimately went with the framing of them behind the curtain. haha.”

Finally, what’s next for you? Any shows coming up or new music incoming?

“Plenty coming up next! Currently we’re recording the rest of the band’s solo projects. Orion and Christy are seasoned vets when it comes to writing. We’ll be doing a few Austin songs too, he’s a wildcard! I have a full length in the works as well. Demos are finalized and now it’s on to ironing out the kinks with the rest of the band. We’ll be playing a benefit here in Minneapolis 9/17 to raise money to buy prosthetics for victims of the war in Ukraine. Other than that, Halloween shows on the horizon and working on getting these recordings out!”