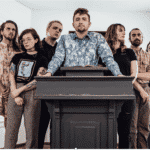 View THE CALLOUS DAOBOYS’ “The Elephant Man In The Room” video HERE.

The band Kill Your Stereo crowned, “insane, intricate, and impressive,” introduced themselves to the underground with 2019’s Die On Mars. Mathcore Index noted of the group’s raucously volatile debut, “These Georgians have the skills to be the next boundary-pushers in the genre,” while Metal Injection insisted the offering would “make you punch everyone ever in the face” and they meant it in the best way possible. The music on Celebrity Therapist shockingly ups the ante with convulsive time shifts and sadistic precision.

The record is unapologetically dense and impenetrable yet confusingly inviting as each song deliriously swerves across stylistic lines. Chronically intriguing in both sound and execution, THE CALLOUS DAOBOYS is composed of charismatic frontman Carson Pace, possessed like a young Mike Patton, guitarists Maddie Caffrey and Dan Hodsdon, bassist Jack Buckalew, drummer Sam Williamson, and violinist Amber Christman. Together the band revives noise rock like they’re summoning the dead delivering a vibrant and distinctly singular concoction of mathcore, sasscore, and post-hardcore — a sound that’s at once abrasive, chaotic, and curiously classy.

Every band claims to combine the most devastating of heavy riffs with the catchiest of melodies, but THE CALLOUS DAOBOYS do precisely that with a wrecking ball of unrestrained frenzy and total mayhem. Derived from the school of The Dillinger Escape Plan, Every Time I Die, and The Chariot, with a heightened degree of theatricality as one of the methods to their madness, think Panic! At The Disco and Fall Out Boy getting slapped around good-naturedly by Glassjaw. Celebrity Therapist even indulges in a bit of drone and avant-garde post-rock a la Sigor Rós and Radiohead.

“The Elephant Man In The Room, “Is this a third cryptic press release? Nah man, this one is just straight over the plate rock music. The kind you find in your dad’s tape deck. Thin Lizzy, Lynyrd Skynyrd, that kinda deal. Hope this song makes it into Stranger Things so our parents will think we’re a real band.”

“Lofty comparisons like ‘Dillinger by way of Mr. Bungle’ usually do nothing but make me think one thing: ‘buuuullshit.’ But you know what? I’m eating my words today, because the song you’re about to hear off of their fourth studio effort Celebrity Therapist easily pulls from those influences, plunges what they’ve extracted into a broken centrifuge, and force feeds you the twisted concoction they’ve created. If you like metalcore but think the genre needs better hooks and a violin, then you’ve found your new band.”

and “What Is Delicious? Who Swarms?” HERE.

Celebrity Therapist will be released on CD, LP, cassette, and digital formats. Find preorders at THIS LOCATION.

Coinciding with the release of Celebrity Therapist, THE CALLOUS DAOBOYS will join MNRK Heavy labelmates Rolo Tomassi for a two-week run of US live dates. The journey will commence September 1st in Allston, Massachusetts and run through September 15th in Brooklyn, New York. Additional support will be provided by Cryptodira.

“On a long Greyhound ride across California, the majority of the lyrics for our album Die On Mars were written while Carson listened to Rolo Tomassi’s Time Will Die And Love Will Bury It. We are incredibly honored to be included on their tour for Where Myth Becomes Memory alongside Cryptodira.”

See all confirmed dates below

“For every skronky guitar spasm and rhythmic tongue-twist, there’s a majestically catchy chorus or a destructively heavy breakdown that actually rewards the ear with something singable or moshable. It’s not just messy and weird for the hell of it, there’s an actual purpose and intentionality to its structure, and so many sonic tidbits to sink your teeth into.” – Revolver

“Atlanta’s THE CALLOUS DAOBOYS make a frantic, freaked-out form of math-damaged metalcore. They recall the late-’90s insanity of The Dillinger Escape Plan and Botch, if either of those bands had ever messed around with pop melodies or employed a violin player.” – Stereogum

“With three minutes of shapeshifting metalcore that sounds even more chaotic than anything on Die On Mars, ‘A Brief Article Regarding Time Loops’ already proves that the wait has been worth it. It continues the DAOBOYS’ knack for fusing Botch/Converge-style mathcore with Every Time I Die/The Chariot-style theatrics, but even that description can’t prepare you for this beast, which also incorporates white noise, a spoken word head trip, a deathcore-ish breakdown, and a complete disregard for traditional song structure.” – BrooklynVegan on “A Brief Article Regarding Time Loops”

THE CALLOUS DAOBOYS: Atlanta Mathcore Group Release New Single ‘The Elephant Man In The Room’ was first posted on August 31, 2022 at 7:00 pm.
©2022 “Metal Meyhem Radio“. Use of this feed is for personal non-commercial use only. If you are not reading this article in your feed reader, then the site is guilty of copyright infringement. Please contact me at studio@metalmeyhemradio.com