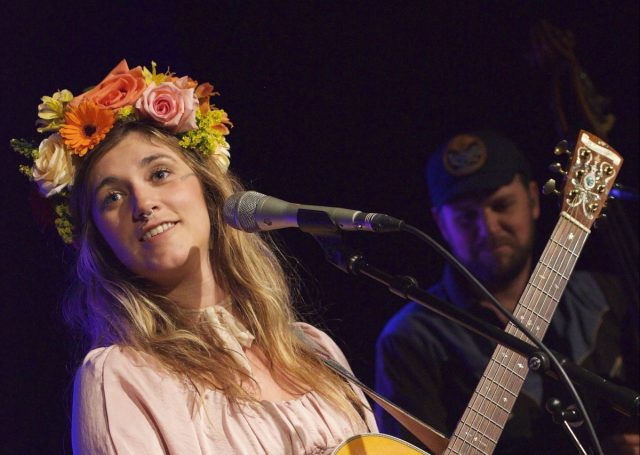 Sierra Ferrell has been one of this summer’s hottest tickets. Her show at the excellent 300 capacity Future Yard venue in Birkenhead was sold out well in advance and by all accounts it was a similar story at other venues across the country. Her ‘Long Time Coming’ album, released last year on Rounder Records was widely praised with appearances on it by Billy Strings and Sarah Jarosz adding further interest. But Ferrell didn’t need to rely on others – it was simply one of the best albums of 2021. So, with a fabulous album under her belt and a growing reputation for hosting brilliant live shows, there was a real air of anticipation around the hall.

That anticipation turned quickly to excitement as the petite Ferrell and her band opened the show with ‘In Dreams’, one of the highlights of the album. What also became apparent was that amongst the capacity crowd there were a large number that were already diehard fans singing along to almost every word. Many of those were young too, not something you see at too many country shows. If the traditions of the music are going to live on then it will surely be the likes of Sierra Ferrell and the aforementioned Billy Strings, that will carry them forward and bring them to a new generation. There then followed another five songs from the ‘Long Time Coming’ album, each one sounding for all the world like it was a sixty-year-old classic, ‘Give it Time’ was pure Patsy Cline whilst ‘Bells of Every Chapel’ recalled Loretta Lynn. Yet this was no retro nostalgia trip that we were witnessing. Rather, it was an immensely talented songwriter and musician tapping into a rich musical heritage and producing a fresh new take on it.

Performing in the UK as a trio with Nathan Leath on fiddle and mandolin, and Geoff Saunders on upright bass, Ferrell took the opportunity to also indulge her love of bluegrass. The set’s three covers were The Osborne Brothers’ ‘Lonesome Feelin’, The Foggy Mountain Boys’ ‘Don’t Let Your Deal Go Down’ and her encore, the classic ‘Dim Lights, Thick Smoke (and Loud, Loud Music)’ first recorded by Flatt & Scruggs. All three were performed beautifully. There was a smattering of older songs in the set but absolutely no padding, all of them exuding the same quality as those taken from ‘Long Time Coming’ which according to my calculation, was played in its entirety, bar one song.

Amongst the many high points was Ferrell switching from her guitar to fiddle and joining with Leath to play a dual fiddle tune called ‘Fox Hunt’. The ease and comfort with which she was able to switch from one classic style or tradition to another was hugely impressive and quite remarkable. If talent equated to success, then Sierra Ferrell would be a megastar. Unfortunately, and as we all know, the music world doesn’t work like that. On the flip side, genuine talent does endure, so hopefully we will be able to go on enjoying stunning evenings like this in accessible and more intimate venues for very many years to come.

Nigel Beckles on the Virtual Sessions presented by The DJ Sessions ......

Eliot and Olivia Goldberg on the Virtual Sessions presented by The DJ ......

‘Artists know best. Trust them and they will usually steer you in ......

Who is the Highest-Grossing Touring Artist of 2022?