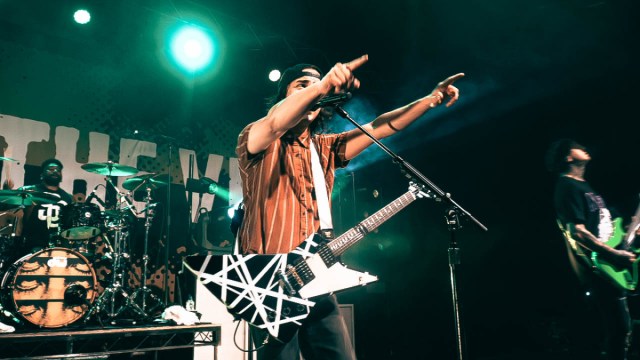 Pierce The Veil made a comeback to Cardiff The Great Hall on the 1st of December 2022 for their first ever healing tour. Excitement was an understatement for their fans, ranging from young to old, Pierce The Veil have impacted so many peoples lives. I was ecstatic when I got confirmed to photograph and review their Cardiff show, I grew up listening to the band so this was a dream come true.

When the day finally came, I entered the venue on a high excited to see the two opening acts- Carolesdaughter and Against the current. Two insanely talented supporting acts, the lineup with be hard to beat by any other bands who are next up to tour Cardiff.

I stood with my camera, shaking my leg with excitement when it was finally time for Vic and Mike Fuentes, Tony Perry and Jaime Preciado to jump on stage. They entered with high energy, Pierce The Veil never disappoint. They played my personal favourites- Hell Above, Bulls In The Bronx and Circles before ending on their famous song- King For The Day, which had the crowd roaring. The night seemed like a daydream, surrounded by smiles from everyone. Let me say this again- Pierce The Veil never disappoint, and this night was a dream come true.