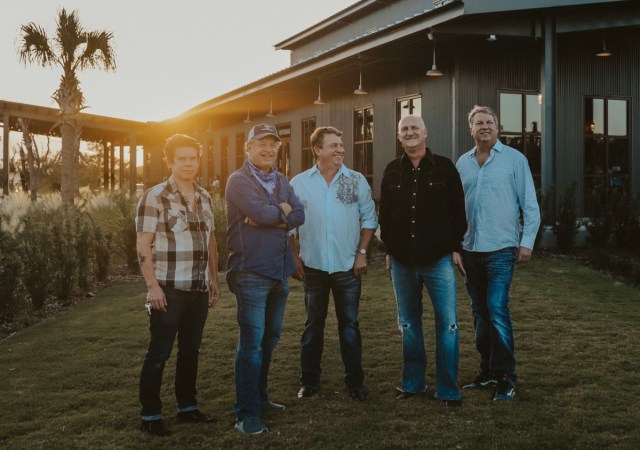 “Big Dreamers” is a fine set of life-affirming, crowd-pleasing country rock songs that presents Blue Dogs to a new audience that may well have missed them the last time around. The rock star dream is, of course, seductive and romantic but bills still need to be paid, mouths still need to be fed, and it is the realities of life that manoeuvred the band into the extended hiatus from which they now emerge. During the time away children have been born, families have been raised and non-musical careers have flourished; all good stuff but the enthusiasm with which frontman Bobby Houck (second from right, above) describes the Blue Dogs return to recording and performing is palpable; “We still have something to say. We can write good songs that we like, knowing other people will like them too. We’ve got a lot more to do, more places to play, and maybe bigger places to play. Because of this album, we get to live this dream longer than we thought.”

Paul Gibson met Bobby over Zoom at his home in Charleston SC to talk about frat house booze, making a living as an independent musician, and having one of the hottest producers around work on “Big Dreamers”.

Bobby, Blue Dogs have been together for many years. How did the band first get together?

I graduated in 1987 and moved to Richmond, Virginia to join Chris Holden and Buck Bradberry. They were writing songs and I started playing with them and that’s how the Blue Dogs started. We named the band after our fraternity punch, which was Hawaiian alcohol, with blue food colouring! Hank Futch, bass player, came on board and that was the band. We played all around the southern states, and as a part-time band we were doing very good numbers but still holding down jobs. We had this double life where we were living between the regular world and the music world. Eventually, we went full-time, and in that period up to 2006 we put out three studio albums, the last being 2004’s “Halo and Good Buys”.

It must have been difficult in the early days, juggling the band and a career.

We were doing it for fun but I remember a conversation I had with my dad late in his life where he said he should’ve encouraged me to really go for it when I was younger, as opposed to the route of grad school, job, law school… for the first couple of years of the band half of my brain was thinking about school. There was a sense of, we can’t do this, just playing around. I was a 7th grade English teacher and baseball coach but all the while I was still playing every weekend.

Despite releasing three studio albums during that time you were a totally independent band with no record company support.

Yes, we worked with John Alagia, who had produced Dave Matthews, on our first album, David Lowery from Cracker produced our second album “Letters from Round O”, and also Don Gehman, who’d worked with Hootie & The Blowfish, R.E.M. and John Cougar Mellencamp; three great albums that we were really proud of and yet no one signed us. We got great reviews but we didn’t get a record deal or a publishing deal. The albums were all independent releases but we were able to make a living. We kind of struck out with the labels, we weren’t what they were looking for at that time. If you remember, Hootie had been very successful but then when the backlash came against them the labels started looking for rock bands, which we were not.

The band took a long break thereafter to pursue careers outside of music and raise your families, but you’ve recently reconvened to make a new album with Sadler Vaden producing. How did you get together with him?

Our drummer Greg Walker met Sadler through family connections when Sadler was about fifteen, sixteen years old. Greg called me up and said ‘you won’t believe this kid I just met, he’s incredible!’, and that was Sadler. He sat in with us occasionally from then on, so there’s an ongoing relationship there.

There’s a familiarity, which is really important for a band trying to put out their first album in years, to feel at ease. Greg, Hank and I would be in the booth recording and Sadler would be in the control room at the desk with engineer Paul Ebersold, and Sadler would be playing along with us as we were recording, and contributing ideas. To me, he’s a musician who can go from a thought to an idea instantaneously, he’s very skilled at getting ideas down quickly. That’s really the key to this record, you had the three old dogs with Sadler where we got the backbone of the record down, and then Dan Hood (guitar) and Charlie Thompson (pedal steel) came in. I’m really proud of all the records we’ve done but this one sounds exactly like us, the songs reflect just who we are.

Are you touring the album this summer?

You know, we’re still kind of weekend warriors, but we have gigs in July and then we have a North East run in August. We’d love to be able to come to Europe, we’ve never played there so that would be a dream.

To finish up, what are you listening to at the moment?

Well, I actually just resurrected my vinyl collection which was water damaged when Hurricane Hugo hit Charleston in September 1989, my records were floating in six feet of water in the basement. The covers were ruined but my mother cleaned them all off and I’m been carrying them around ever since. I finally got a turntable at Christmas so I’ve been having a great time listening to Neil Young, Little Feat, all that old stuff I grew up with. There’s also a band from Charleston called Susto, which is basically a guy called Justin Osborne. He’s like a younger, weirder version of Jay Farrar of Son Volt, he’s really interesting.

DJ Colette on the Virtual Sessions presented by The DJ Sessions ......

Ramon Miras Pazos LIVE on the Virtual Sessions presented by The DJ ......