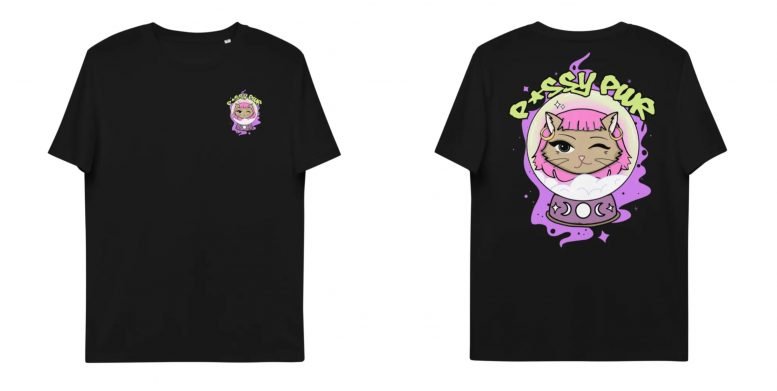 London singer/rapper and producer Jessica Wilde is finally here with her latest single, the infectious Kissing My Best Friend. The personal and deep-pop gem comes with a lush animation video created by digital illustrator and NFT mentor Aliusirene.

As one of Wilde’s most compelling works, through her, brutally honest and witty lyrics, and evocative singing vocals, ‘Kissing My Best Friend’ takes us deep into Jessica’s mind. Giving us a cinematic musical backdrop with South London grit and holding us to the edge of our seats as she ‘Thinking of Kissing her best friend’.

Jessica explains: “This song is exciting for me as it’s my first self-produced release. As a female artist, it feels really good to be seen not only as a voice but also as a producer. ‘Kissing My Best Friend’ is a very personal tune but hopefully, my best friends won’t figure out which of them it’s about haha!”

Her fiery new song has an undeniable way of getting you dancing while also making you think about important topics like gender norms, sexuality, and taboos, she shares her deepest thoughts and desires in a compelling way.

With the help of her dedicated fans, she is performing free live shows at the Iconic Hootananny Brixton and Laylow with her rapidly expanding brand (with merch made in collaboration with Fame Design) and event, ‘PxSSY PWR’ – a festival showcasing the most exciting female talent. We had a quick chat with Jessica about her music, live shows & clothing line.

You are doing well with the “PxSSY PWR” merch line (in collaboration with our very own Fame Design), can you let us know more about your thought process going into it?

Yes, the PxSSY PWR Merch line was inspired by an alter ego character I started on socials called ‘Ya gurl Charlene’ who fronts my brand ‘PxSSY PWR’, which represents exciting female artists. Charlene wears a pink wig and is all about the PxSSY PWR hence the cat with the pink hair on the merch design. As I have had eczema it was also important to me to use a material that is good for the skin, so the T’s are 100% cotton and ethically made which aligns with our ethos.

Can you reveal any future plans for the PxSSY PWR merch line and the live shows?

We have and will be bringing even more exciting artists to the PxSSY PWR stage including Etta Bond, Morgan Monroe, Zoe Kypri, SE.V.EN, Eliza Legzdina, and many more at our residency show at the Iconic Hootananny Brixton. We also recently did a Halloween special in Collaboration show with the immersive events brand ‘love Bullets’ at Laylow and you can expect more coming. There are also some exciting collaborations coming for the clothing which will be revealed in 2023…

Tell us everything we should know about your new single ‘Tell Kissing My Best Friend’.

This song is exciting for me as it’s my first self-produced release. As a female artist, it feels really good to be seen not only as a voice but also as a producer. ‘Kissing my best friend’ is another very personal tune but hopefully, my best friends won’t figure out which of them it’s about haha!’

Where do you think your music fits in today’s world?

My music has a concoction of influences but I’d say the main genres are soul, RnB, Hip hop. I like to mix it up with both singing and rap, spoken word. I like to tell vivid stories usually inspired by things I’ve gone through.

If you were stranded on an island for a long time and could only choose three albums to listen to, which ones would it be?

If you could tour with any musicians, dead or alive, who would it be and why?

SAULT, cos I love their rawness, authenticity, and powerful messages of their music.

Lauryn Hill, again her music is real and hits the heart.

How would you describe your personal fashion style?

Like my music, my style is an amalgamation of different styles all merged into one. I like big baggy street / Skaters T’s like the style of the PxSSY PWR T’s. I love a good vintage store to get one-off pieces and mix up an oversized more baggy look with something a little sexier and glam. And right now I’m obsessed with hats, recently I’ve been wearing cowboy hats and buckets.

What do you want people to take away from listening to your music?

I really just want people to feel. I want them to get taken on a journey that makes them feel inspired or connected, the kinda music you listen to on repeat in your bedroom or on the train. It makes you get lost in the vibes and feelings of it.

What can we expect from you in the next twelve months?

Lots of collaborations with artists I love, a new music project that I’m really excited about, Jessica Wilde and PxSSY PWR Shows, and Charlene taking over the world haha! And much much more…

Jessica Wilde just landed an Ad Campaign with Adidas. She’ll be the voice of their new women’s running trainer, which will also feature all the top female athletes around the world

A number of collaborations are expected from Jessica Wilde as she is set to work with Rudimental and more in the future. Her next collaboration is coming out soon, with music by house legend Todd Terry and producer, DJ Carly Wilford.

’Kissing My Best Friend’ is out now in all digital stores:

Written by FM For Music