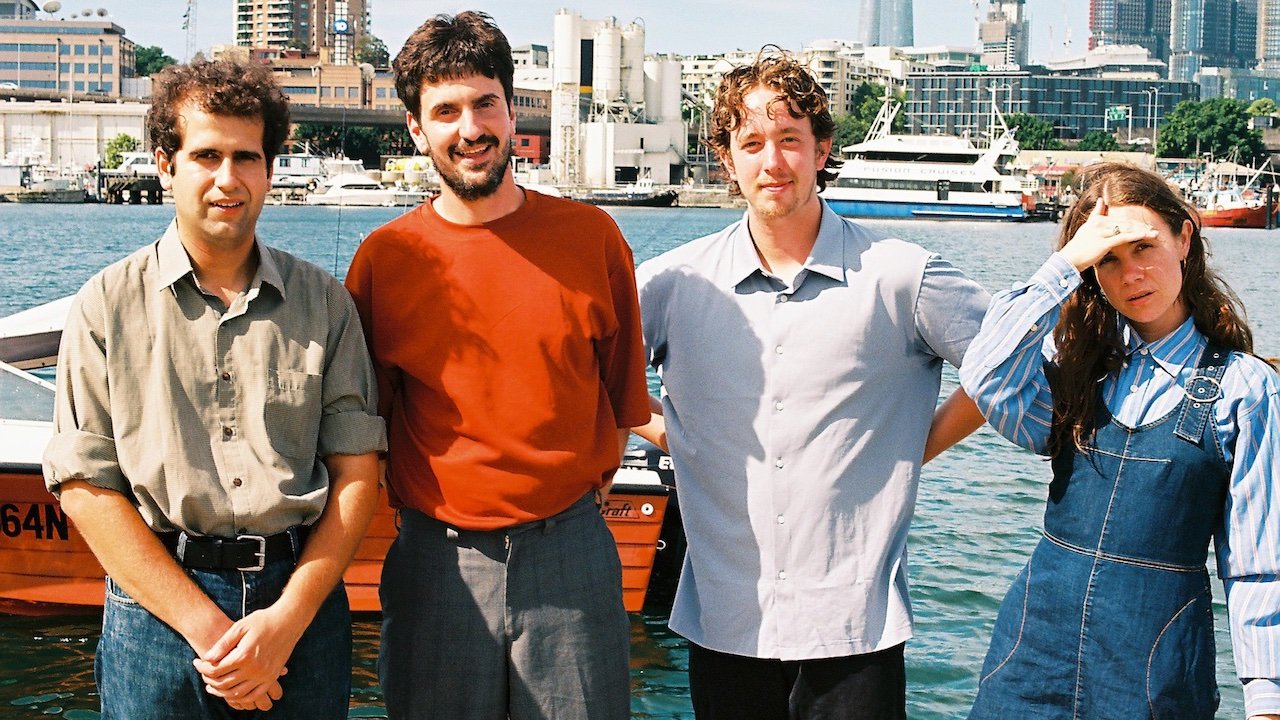 Though named after the humble delivery vehicle, the name Flowertruck simultaneously recalls something pleasant and something intimidating. Sometimes, they both hit as hard – after all, despite Limmy’s insistence to the contrary, a kilogram of feathers is equally as heavy as a kilogram of steel.

On the surface, Flowertruck make buoyant and bright indie pop music with major chords and charming melodies. Below the surface, however, are frank lyrics of mental anguish, existential crises and an increasing sense of isolation in an interconnected world. You’ll get your flowers, and they’ll smell beautiful, but there’s still a risk of getting hit by a truck.

The Sydney-based band – who’re now freshly a trio with the departure of keyboardist Sarah Sykes – released their second studio album, Partly Cloudy, in early September. Flowertruck’s first album in four and a half years is honest, but it’s also as bright and as captivating as the band has ever sounded.

To further understand this balance, as well as the influence of nominal milestones, various Sydney bands and Steve Martin, Music Feeds spoke with vocalist, lyricist and bassist Charles Rushforth.

Music Feeds: As soon as you put out Mostly Sunny, you knew exactly what the next album was going to be called, didn’t you?

Charles Rushforth: Yeah, I actually did [laughs]. It was such a bad time making the first record, to be honest. It wasn’t anyone’s fault, really. It’s just that the album cycle is like… it’s like a washing machine setting that makes you hate your laundry. The name [Mostly Sunny] was a funny nod to how I was feeling in that process a little bit, but it encapsulated much more that was to come further down the track.

MF: What was the process like this time around? Do you feel it was better for you personally?

CR: I really do. It also took a lot longer to make this album, so I think we all kind of stopped trying to play the game. We all just took the opportunity to take a deep breath. Covid happened, obviously, so the first half of the record was done after a little bit of a hiatus right after I’d been living in Broken Hill.

We tracked the first half of the album in a home studio in Stanwell Park. When Covid hit, I was really reflecting on the band’s history, the relationship between all the members, and what it means to be in the struggle of music, especially doing the independent music thing. And do you know what? I love it so much.

MF: Flowertruck seems to be the epicentre of an interesting mix of bands and projects. You and Will [Blackburn] have Greenwave Beth and you both play in Bored Shorts, plus Will plays in Sunscreen with Sarah, and David [Gauci] has GAUCI with his sister.

MF: What do you feel it is that draws you all back to Flowertruck, even with so much else going on?

CR: I think it’s that it was our first thing together. We were really forged in the fires of playing gigs, practising twice a week. So it now feels really comfortable going back to Flowertruck, because there’s so much muscle memory – there is this massive, quivering muscle.

With music, I’ve always had the argument that you should try and get as many perspectives on it as possible, and that means playing in lots of different bands, in different positions, getting new new feels for what you do. It all ultimately informs all of your work.

Flowertruck is essentially a band of lead singers now – I mean that in the sense that no one’s feeling like, “Oh, this isn’t doing enough for me, I want to do my own thing.” Everyone’s already got their own thing going on. It’s been a long time trying to get the dynamics of this band right and make it really sustainable. Ideally, I’d love to be doing this forever.

MF: Do you write with Flowertruck in mind?

CR: I really don’t think about it too much. I think it’s very readily obvious 90% of the time. You get flashes of creativity and things like that and you just go with it. I remember listening back to the last album and I was like, “This is different to what I actually thought that sounded like in my head when I was writing it.”

I wanted the next album to be a little more fun. After that, I was writing lots of fun, stupid songs with complicated bass lines. I knew, partly because of the instrumentation and where I was coming from in writing it, that there was no other place for these songs to go.

MF: Is there anything on this record, maybe sonically or lyrically, that you feel wouldn’t have made sense on the first record?

CR: I think a lot of Sydney bands – a lot of bands in Australia in general, really – they get the buzz-band, flavour-of-the-week tags and they’re freaked out by it. They put all the money they’ve made from playing gigs every weekend to go to the biggest rehearsal studio, the biggest recording studio, and try to replicate what they’re already doing.

What happens there, sound-design wise, is like getting a haircut: if you don’t know what to ask for, you just end up getting what the other person has.

With the first album, there was a massive feeling of not feeling like we were in control a lot of the time with how things sounded. There was this big window between what I wanted and what I was trying to express and what was ultimately being created.

Going into the second album, I learned a lot. I spent a lot of time with my friend Cody [Munro Moore], who has the studio Stranded where we recorded. He helped us bridge that gap a lot better, so to speak. I think this album is a lot more realised. There’s some references to The Bats, some really cool Triffids-y stuff in terms of the vocal processing.

MF: Many of the songs on Partly Cloudy had been road-tested in that 2019/2020 window. What’s the oldest song that made it to the album?

CR: Probably ‘Father Of The Bride’, I’d say. That was a real old one and I’m really glad that it got to be part of this album. I think it just ties into the theme of what this album is all about – that idea of milestones coming around, what they signified when you imagined them and what they signify as they’re happening, and how you think you’ll think about them afterwards.

MF: Were you channelling a bit of Steve Martin on that one?

CR: Of course. So, I was at a wedding’s bridal shower. I think they’re called bridal showers? I could be completely wrong. Let’s just go with engagement party. So, I was there at that and I was watching the father of the bride be so uncomfortable with the whole thing. He’s having this existential crisis.

In my head, I was imagining that maybe he’s thinking that this is it, you know? “My daughter’s getting married, then grandkids, then I’ll die. The moment is finally here.” I think it’s fascinating because I think that’s also something that everyone’s very preoccupied with.

When you play music, you look at all these milestones and accomplishments. You look at all Earl Sweatshirt did by the time he turned 23. It’s kind of meaningless, but at the end of the day, I really do believe in the potential of any great work that can come from anywhere at anytime.

MF: It’s interesting that you inhabit these kinds characters while also writing stuff that is explicitly autobiographical. What’s the relationship between those two for you as a songwriter?

CR: I remember something that Will [Farrier] from You Beauty said once. I think it was around the time they were putting out their second album, Illywhacka. It was something along the lines of, “People who write songs about themselves are fucked up.” That’s coming from a guy who’s basically a literary genius worthy of the Nobel Prize.

I feel like I’m a lot more mature now and I don’t have to write about the things that preoccupied the last album. A lot of its songs were overtly about breakups and things like that. Lyrically, this album is a lot more simple. It’s about zooming out and getting into the raw ingredients of those things.

There’s also still some deeply personal songs, like ‘Likelihood’, which is about realising you’ve arrived at a certain age and feeling terrified of how you got there. You have to keep going, even when you’re worrying about not having your life figured out yet. Sometimes I can’t help writing that way. I’ve got to get it out somehow.

KESMAR: My Favourite Bits of Music Equipment and Studio Gear

PREMIERE: The Prize Channel ‘Countdown’ in ‘Wrong Side of Town’ Music Video

The post Flowertruck: “I Was Writing Lots of Fun, Stupid Songs with Complicated Bass Lines” appeared first on Music Feeds.