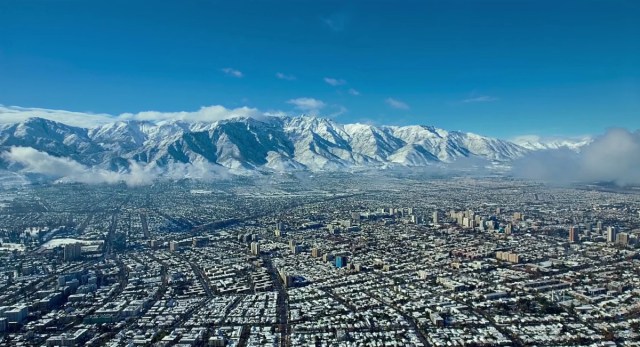 According to Wikipedia, a cordillera is ‘an extensive chain and/or network system of mountain ranges’. Derived from a Spanish word, one of the most notable examples are the Andes Mountains. They form the longest continental range in the world and span seven different countries down the western side of South America. They’re the highest outside of Asia and one of the defining features for the nations they cross.

Chile is blessed with a diverse array of habitats and climates, bookmarked by the Pacific Ocean to the west and the Andes to the east. These imposing giants stretch down its entire length. In many ways, ensuring that it remains a very self-contained society. After visiting the north (Nostalgia for The Light) and south (The Pearl Button), filmmaker Patricio Guzmán takes his lifelong mediation on his homeland to its heart in The Cordillera of Dreams.

The Cordillera of Dreams uses the mountains as a metaphor for the silence which lingers over the history of Chile. Guzmán is as obsessed with his nation as only an outsider in their own home could be. It’s a thoughtful essay on what remains unsaid in the South American state and how the spectre of the past impacts on the present. The Cordillera of Dreams is another paragraph in Guzmán’s love letter to his birthplace. A wanderer with a perpetual feeling of estrangement.

The Cordillera of Dreams is out in UK cinemas from 7 October.