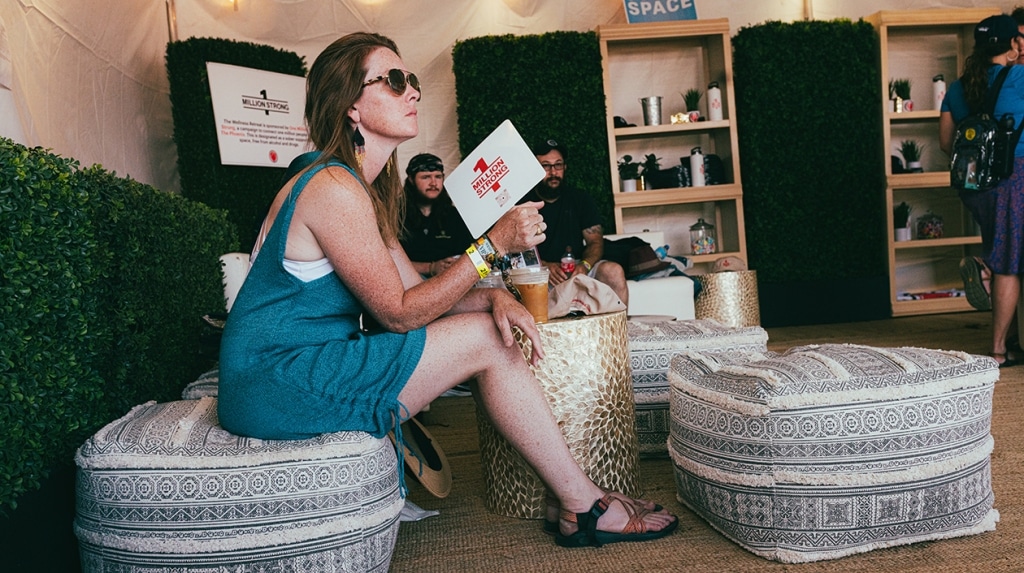 Nonprofits Stand Together Music and The Phoenix have launched a new initiative in an effort to create safe spaces at music events for fans in addiction recovery.

The initiative, called One Million Strong (1MS), aims to eventually help 1 million people access sober spaces at music events by engaging communities across the country, with the help of musicians, venues, festivals and streaming and ticketing platforms.

Stand Together Music is part of the Stand Together Foundation, which is focused on breaking the cycle of poverty in America, while The Phoenix is building a national “sober active” community.

Related
Eminem Opens Up About Being Famous Amid Addiction: ‘I Don’t Know How the F— I’m Still Here’

“The Phoenix focuses on strength versus deficiency and community versus loneliness,” says Stand Together Music general manager Colette Weintraub. In the music industry, she explains, community is often built around drugs and alcohol, so those who choose to be sober can feel left out. “It’s a lonely place to be. The One Million Strong name is that supportive community – one million people coming together to support the issue and support each other.”

The initiative, which encourages both sober people and allies to join, will strive to reach the 1 million mark by creating sober spaces at venues, festivals and events throughout the country. Sober spaces include physical structures where music fans can mingle without the pressure of drugs or alcohol, or supportive groups that enter concerts together for strength.

“1 Million Strong is supporting both allies and those in need of recovery and we are doing this by creating sober spaces at venues, connecting people in recovery at shows, giving allies a game plan, and uniting with musicians to remove barriers to sobriety,” said Scott Strode, founder and national executive director of The Phoenix. “Together with the music industry, The Phoenix and Stand Together Foundation is fostering a community to support those in need of substance use recovery because choosing recovery shouldn’t mean giving up, it should mean gaining so much more.”

The initiative works with each artist, venue, festival, etc. to champion the cause in an assortment of ways, including by creating sober spaces, orchestrating moments of mindfulness between artists and fans, having members of The Phoenix backstage to host yoga and mindfulness sessions and/or providing mocktail services at every concert.

Wellness Retreat at One Million Strong pop-up at Bourbon and Beyond festival in Louisville, Kentucky.

“It can often feel scary for people who are sober to then return to the things they once did like concerts,” says Weintraub, adding that these tools can help develop more inclusive spaces for everyone.

The tools have already been put into practice in the industry, including at September’s Bourbon and Beyond festival headlined by Jack White, Alanis Morissette, Pearl Jam and Chris Stapleton. Weintraub says she reached out to festival producer Danny Wimmer Presents (DWP) about creating an elevated experience that wasn’t an afterthought hidden on the festival map. The idea was to “show people that sobriety doesn’t limit your access point, but actually can give you access.”

The sober space at Bourbon and Beyond, which resembled a spa or retreat amidst the noise, welcomed more than 5,000 guests and was welcomed back for another DWP festival, Louder Than Life, the following weekend. At both festivals, the “mocktailer” ran out of drinks due to demand, according to Stand Together.

Mocktail cheers at One Million Strong pop-up at Bourbon and Beyond festival in Louisville, Kentucky.

“It was really important for us that our sober fans attending Bourbon & Beyond knew that they had a place to go, that they were welcomed and there’s a community that was here to support them, so that they could enjoy the festival just as much as anyone else,” said DWP chief marketing officer Chamie McCurry. “Fans are thanking us for providing this, thanking 1 Million Strong, thanking the Phoenix.”