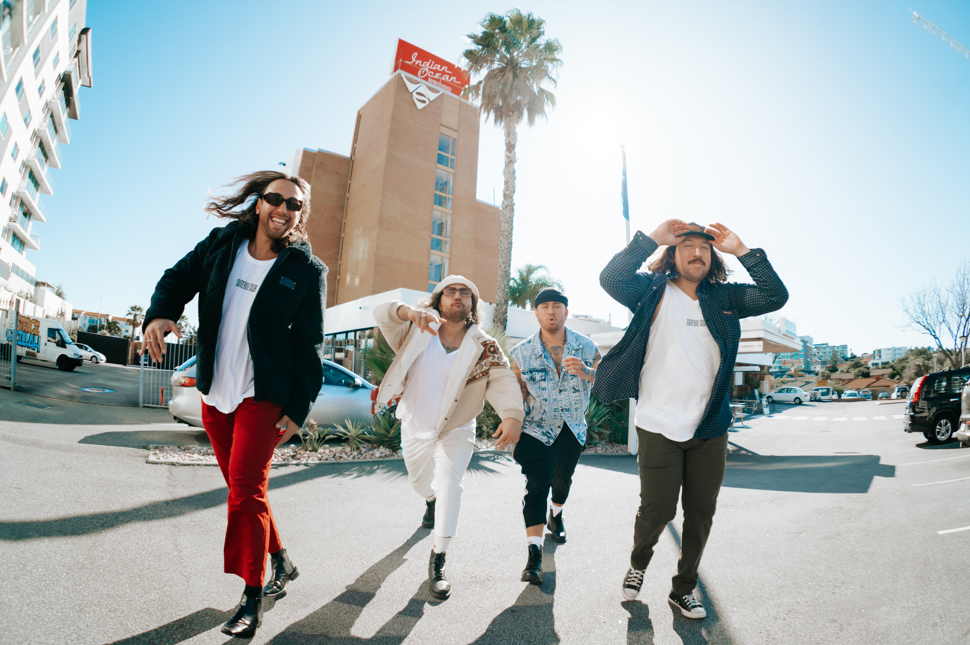 To us, this album sounds like and feels like summer. It’s the essence of late-night drives down the coast with the crew, that first hit of the summer sun on ya face. We wrote most of the album on a band trip to The Mount with Six60 – a few icons who offered to mentor us but soon became lifelong mates. We ended up just putting who we are into the music and left that trip so inspired. We went home and finished writing and recorded most of it in our home studio, sharing files with our producer team Robby Desa in Sydney and Marlon Gerbes in Auckland, then found the final polish with Raul Lopez and Hector Vega in LA. This album is a good time, it is global, and it is the post-pandemic pick-me-up we all needed, and hopefully, it’s the soundtrack to your summer!

Something a little fresh from us, an 80’s inspired palette cleanser that steers away from our usual surf reggae sounds. It’s a story and a half from another time that’ll live rent-free in ya head whilst you shake it like Sally!

The simplicity of a Summer Anthem in a skank-driven love letter to the Mother Land, Aotearoa – New Zealand! Cool It Down is a heavy weight on this Album and will forever be the song that gave us the opportunity to become the act we are!

Honey Dance with Me

An ode to the rock gods, Honey Dance is a love song discussed in an anthemic sing-along for the people who froth driving drums, soaring guitar solos and a chanting vocal!

The cruiser of the family, at first glance, you might see it as the middle child – doesn’t make a fuss, might not make you move, but the subtle feel-good charm will have you coming back every time the sun sets and humming along till it rises again.

A bedrock in the COTERIE live show experience. The intimate-stadium sound of an ambitious storyteller, leaves you with the conviction of a polarising sound & message.

The tune feels like home, sounds like a summer house party and looks like you &amp; all your mates riding bikes down a strip of your favourite coastline – West Coast Drive is Nostalgia summed up into a good vibes anthem.

Brotherhood, Camaraderie, Family. A song written with and featuring our brothers Six60, Always beside you is a story for the ages… but this song is for the Ride or Dies.”

A reggae-infused march in the Power of a People, Peace and Love.

It’s the romanticised view of an outsider. The misfits dream to make it all cool in a lucid attempt at believing their karma’s not as bad as they think.

The fragility of the human heart, the story of an Accidental Love for something that ain’t good for us. It’s told from behind the keys of an upright piano in a small local bar.

It’s probably a Sunkissed World anyway – we just see it a little clearer when we’re with our Sunkissed Girls.

We got the moves to be a psycho, but instead, we write surf-reggae. This piece talks about the temptations of your mind’s darker side and how we battle every day to kill off those vibes.

A goodbye letter to the unappreciative users. We all have them, but none of us need them! We bid you farewell, coz you’re never gonna see my face again.