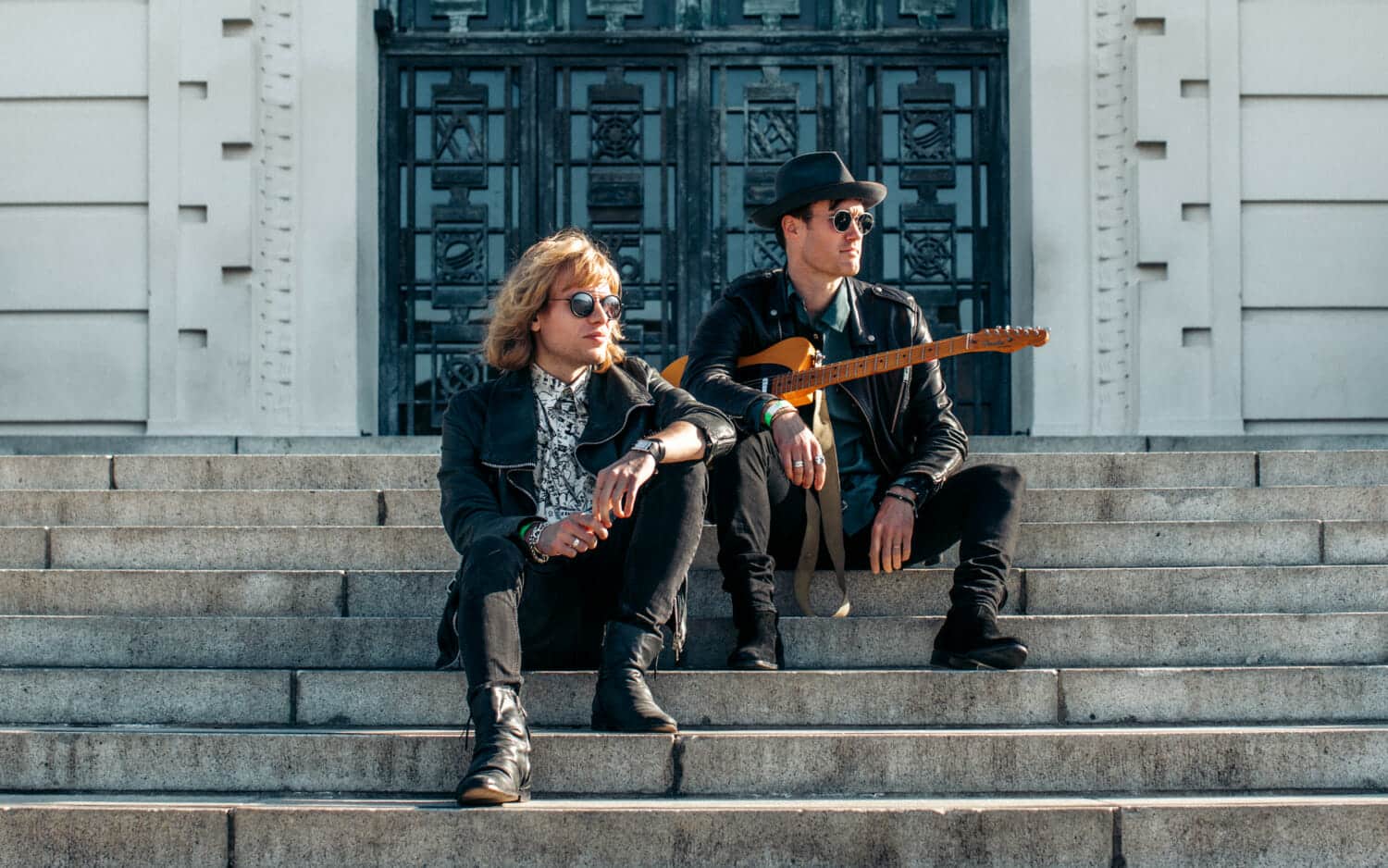 Six years in the making, Goldenvoice‘s Portola Music Festival made its long-awaited debut in San Francisco earlier this year. Held within the confines of Bay Area shipyard Pier 80, the new two-day event welcomed festival goers from across the globe for its inaugural run, which turned out to be a critically lauded success. In addition to Flume, The Chemical Brothers, Kaytranada, Jamie xx, Fred again.., and other electronic frontrunners, Jimmy Vallance and Tom Howie of GRAMMY-nominated outfit Bob Moses showed up—and showed out—at the latest and greatest to grace the Bay Area circuit.

Last November, Bob Moses announced their 2022 North American tour with a humorously-crafted YouTube video; since then, Vallance, Howie, and their entrusted live band members have been gigging nonstop in support of their March studio album, The Silence In Between. In August, the group imparted a new collaborative single alongside Kasablanca, “Afterglow,” which has already amassed north of 1 million streams on Spotify alone. On Saturday, September 24, a reinvigorated Bob Moses graced the Pier Stage at Portola Festival to deliver a resounding hour-long set composed of crowd favorites, along with a hopelessly infectious cover of the INXS classic, “Need You Tonight.”

Before taking the stage at Portola Festival, Bob Moses sat down with Dancing Astronaut to discuss their latest single, prior collaborations, and their ongoing album tour.

It’s been six months since the release of ‘The Silence In Between.’ How long had the project been in the works prior to its March release?

Jimmy: “That’s a hard question to answer because ‘Love Brand New’ is on the record, but we wrote that song probably three years prior to it coming out.”

Tom: “Well, we wrote the idea maybe two, two-and-a-half years before it came out. We had the [vocal] melody, the guitar bit, and the bass, but not quite the right sound. It sat in the vault for a while and we finished it during lockdown. We basically wrote most of the album during the lockdown, so about a year prior. But you could argue that every album has been in the works since the beginning of our lives.”

Which album inclusions have you found to be your favorite(s) to play live?

Jimmy: “‘Broken Belief’ was the one on the album tour that really surprised us. We almost didn’t put it on the album! It was one of those things where we were like, ‘Is this a bit too dark?’ So, it almost didn’t make the album, and we knew it was going to make the live show, but we ended up adding it to the set the day before going on tour. It didn’t even have programmed lights or anything, but the guys in the band were like, ‘We should add that one; it’d be fun.’ They won us over, and it’s a really great one to play live. It was kind of like the little engine that could.”

Over the last year, you guys have released collaborations with Elderbrook, The Chainsmokers, and, most recently, Kasablanca. Can you touch on how these came to fruition and how each production process differs?

Tom: “Elderbrook was a Zoom one; we actually only met him recently. He reached out asking if we’d like to [collaborate], we sent back around five or six ideas, and he gravitated toward one of them and wrote the verse/chorus melodies. We really liked it, so we got on a Zoom call, wrote the bridge, and fleshed out the production together. Regarding ‘Afterglow,’ Jimmy knew Shaun [Kasablanca] from way back…”

Jimmy: “We’re from Vancouver, Shaun’s from Vancouver, and I used to work with him when I had a metal band back in the day [and] he had a punk band. He went on to write ‘Closer’ with The Chainsmokers and now he’s in Kasablanca. We connected and spent two days in LA with him writing ‘Afterglow.’ And with The Chainsmokers, they’d been messaging us since like 2017, around the time we both got nominated for a GRAMMY. But they obviously got busy, we got busy, and it wasn’t until the pandemic that they sent us a demo of [‘Why Can’t You Wait.’] Tom and I were in the studio that day and I was like, ‘Do you want to just drop what we’re doing and work on this?’ We fleshed out the idea, sent it back to Drew and Alex, and they wrote us back the next day saying ‘This is sick, let’s go!’”

Tom: “The funny thing with these collaborations is sometimes you get lucky and magic happens, and sometimes you go in and want to bang your head against a wall. We were just lucky that these ones turned into really cool ideas.”

Jimmy: “Yeah, like with Kasablanca, the first day we got nothing and the second day we got ‘Afterglow.’”

Bob Moses has such a distinctive sound and yet your repertoire is so diverse. How would you say your sound has evolved over time?

Jimmy: “I think we just got less hung up on the little things. We were writing for very specific reasons in the beginning. We were playing lots of warehouse raves in Brooklyn, and we’d been writing a lot of music to fit that sound. Then, as we started to progress, we really wanted to be a real band, whatever that means… We wanted a drummer, we envisioned it being a bigger operation. We love bands like Massive Attack that did the electronic thing but also have a deep, meaningful message with songs that you can really sink your teeth into. We try to experiment with the range we’ve set up for ourselves.

How have audiences been receiving the new album over the course of your tour?

Jimmy: “This is the busiest year we’ve ever had. I have a pretty good memory, but this year has felt like a blur. I think what surprised us the most is that… Usually you’ll put out an album and there will be kind of a lull when you start playing it out. Like, when we first started playing ‘Tearing Me Up’ before everyone knew it, people would just stand there and look at us. We had thought this was a dynamite tune! Did we totally fuck it up? Lo and behold, they were just soaking it in. But our new record…Right when we went on tour, people immediately had listened to the album and were singing along.”

Tom: “People knew all the songs already, which was both cool and surprising.”

Jimmy: “And that translated everywhere, so that was a very welcomed surprise for us.”

Looking ahead, what shows are you most looking forward to?

Tom: “I mean, other than being stoked for this [Portola]…”

Jimmy: “Corona Capital in Mexico City is apparently like the Coachella of Mexico, and Mexican crowds are amazing. We do a lot of clubby stuff down there, but Corona Capital is going to be a really cool moment for us and that’s coming up [in November.] But we’re also going on a Europe tour…”

Tom: “We’re going to South America two more times before the end of the year… We’re playing III Points in Miami, which is an awesome festival. It’s a lot.”

What are your thoughts on Portola Festival’s debut lineup?

Jimmy: “It’s a good mix of both friends and acts that have inspired us. You have The Chemical Brothers and Fatboy Slim, who are both ‘90s icons that inspired our generation of dance music. You’ve got The Avalanches who’ve regrouped and will be amazing, you’ve got Fred again.. who’s blowing up, you’ve got TSHA who toured with us and is a friend of ours… It’s insane!”

Tom: “You’ve always got great artists at festivals, but when you look at this lineup…It’s all the artists I’d want to go see. And I’d still have FOMO because, if I see one, then I’d miss three others that I would want to see.”

Jimmy: “No exaggeration, as far as electronic music in America, you’d be hard-pressed to find a better lineup than this. And it’s crazy to see how big underground dance music has become. You can hardly call it underground anymore…They’re doing like 20,000+ tickets. It’s pretty amazing.”

Who would you love to work with next?

Tom: “I would love to work with Fred again.., and I’d also love to collaborate with Ben Böhmer. We actually tried to [collaborate] with him, and I forget why it didn’t end up happening.”

Jimmy: “We went out for a great steak dinner with Ben in Buenos Aires the other week. If the steak dinner was any indication, the collaboration is still on the table. There’s still hope for it.”

The post Bob Moses recap a fruitful 2022 at Portola Festival, ‘This is the busiest year we’ve ever had’ [Interview] appeared first on Dancing Astronaut.