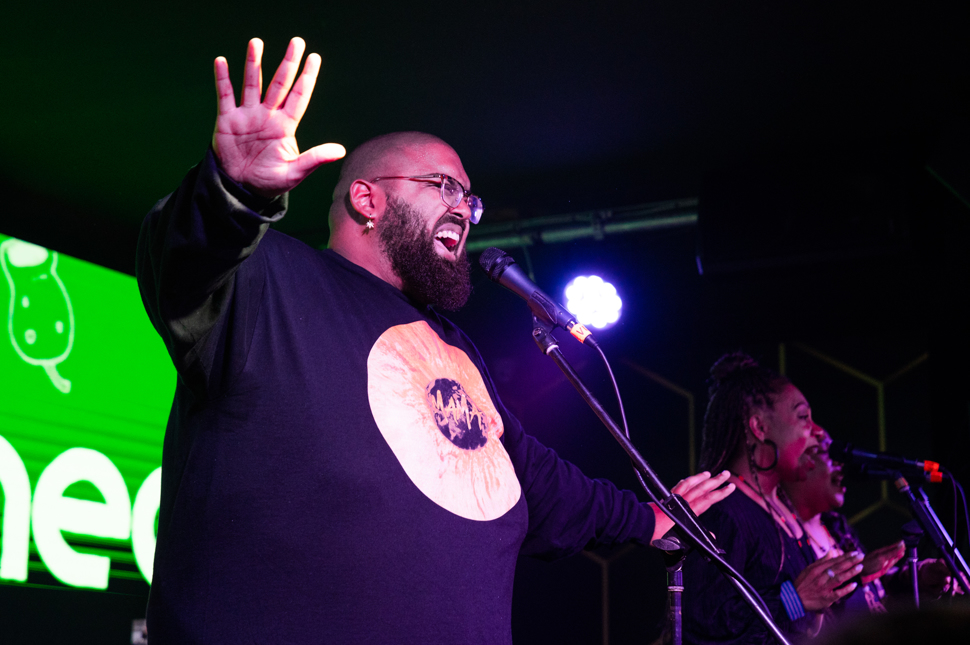 While we have to wait for more details about the artists performing and music industry professionals holding conferences at BIGSOUND 2023, having dates is very exciting.

At this year’s event, we saw A LOT.

Self-proclaimed “hippie country” sibling trio The Buckleys stole our hearts on BIGSOUND Night One as they got off to a rollicking start on the Woolly Mammoth stage with a Southern swagger and powerhouse vocals.

With guitarist Lachlan sporting a double-neck electric guitar, keyboardist Molly frequently swapping out synths for a mandolin, and lead vocalist Sarah’s rock energy as she belts catchy choruses while shredding on the bass, this troupe of utterly unique and innovative musicians are showcasing the meaning of the term ‘multi-instrumental’. The pitch-perfect harmonies executed by Sarah and Molly enhance the retro vibes within the bright indie-country-rock soundscape. It’s such a fun performance delivered with sunny, joyful enthusiasm. Particular highlights include debut single Daydream and the spirited country bop Oops I Love You with its stunning guitar solo and charming disco beats.

It’s the most crammed show yet at BIGSOUND, which adds to the anticipation. Budjerah jumps onto the stage to a drum beat, singing his hit Higher and getting the crowd to sing along. Immediately his talent is palpable, and it’s evident that he is one of the best vocalists showcasing at BIGSOUND this year. Already an established artist in Australia, it’s clear that Budjerah will be hitting international acclaim very soon.

Lastly, Beckah Amani held the attention of the crowded room with humility and quiet generosity that was striking on Night Three.

She sang not just with clarity of voice in a musical sense but also in a rhetorical sense; her songs are clear-sighted and resolute, embodying dignified self-worth and championing equality. “I’m beyond what they think of me / I’m not changing for nobody,” the Tanzania-born, Australia-raised singer-songwriter proclaims during Standards, accompanied by acoustic guitar. Amani’s elastic vocal range allows her to voice multiple shifts in perspective within her songs, and her steadfastness is often compellingly contrasted with a vulnerability expressed musically through moments of falsetto – such as the chorus of I Don’t Know Why I Don’t Leave You. Her songs subsequently possess a dialectic quality, addressing the push and pull of thesis and antithesis, with the eventual emergence of resolution: “You’re more than enough,” she sings at the conclusion of Lebka Leka. There is no doubt that the same is true of herself, too.

We can’t wait to find out what BIGSOUND 2023 will hold.