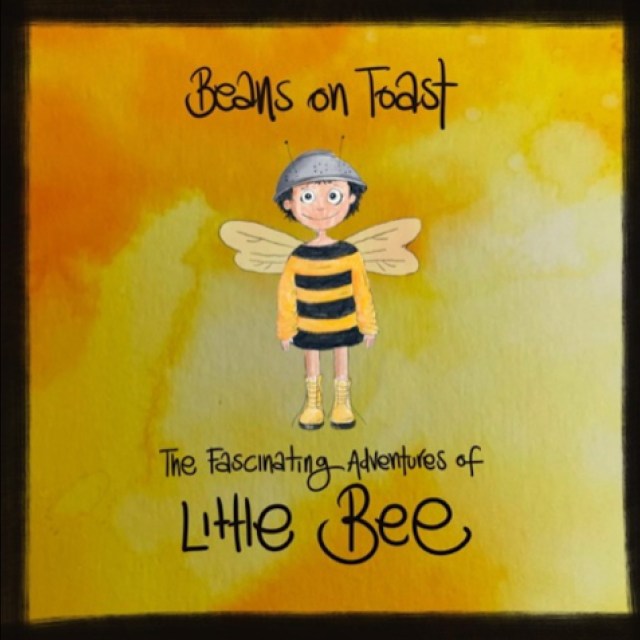 A potpourri of child-friendly, environmentally-minded songs from AUK favourite.

Something a little different for the AUK pages, ‘The Fascinating Adventures of Little Bee’ is a collection aimed broadly at ages 2-10, though there’s plenty that anyone of any age can get from it. It’s really a lovely concept and beautifully realised – ten story songs illustrated with colourful pictures throughout, and available as ten little picture books.

The music of each song is basically the same tune, with simple guitar and ukulele chords provided, and easy-to-learn words and choruses, seldom extending beyond 90 seconds. Cleverly, and to keep the interest, each song has a musical background that changes and complements the subject matter – so even though the melody is similar, they range from folk (opener ‘The Sea’), bluegrass/mountain music (‘The Woods’), retro rock and roll (‘To Town’), even hip-hop or modern r’n’b (‘To the City’), and so on, throughout.

Beans on Toast is a UK folk singer-songwriter whose work has previously been reviewed and featured in AUK. On this collection, he teams up with nurse and teacher Jaime and Lily Adamsfield, and they have created a character in Little Bee through which to express a curiosity about the beauty of the world, and the challenges that face us. It is broadly aimed at encouraging thoughts of possibility and positivity, and asks the listener to engage in the world outside, and to persevere (eg “Rainbows are rare, but they teach us to be brave – to really see the rainbow, you must standing in the rain”).

This is a really lovely endeavour, and it follows in the footsteps of the likes of Woody Guthrie and Pete Seeger, who alongside their political oratory, would make sure they were also reaching out to the generations to come with their words and songs.

A Look At Some Common DJ Scams with Brain S Redd and John Young on ......