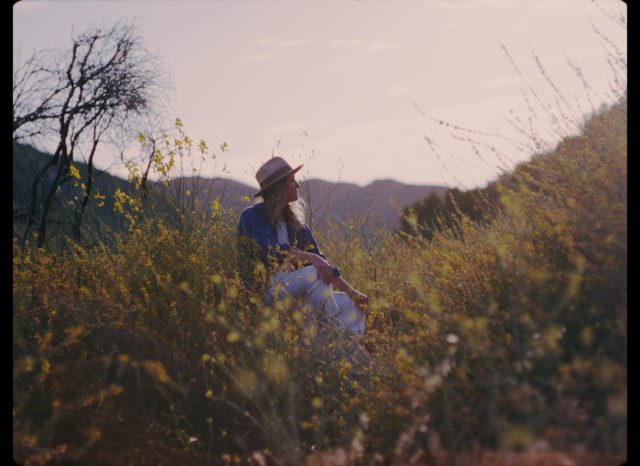 The new video from Los Angeles songwriter Lauren Scott-Phillips begins with delicately-picked, acoustic notes on the guitar as the sun shimmers through wild flowers in a gorgeous rural location.  It’s immediately engaging.  This is the third of four collaborations with producer Elliott Beenk, who was introduced to Scott-Phillips through GRAMMY-nominated producer Brian West (Nelly Furtado, Maroon 5). Though stripped back instrumentally, it’s rich and warm and the production allows Scott-Phillips’ clear voice and heartfelt words to be the focus.  And her words really are disarmingly beautiful.  This is a song of unself-conscious love, of giving yourself completely to another.  Songs often hang on negative emotion but this is an example of how to write a song reflecting happiness and contentment and genuine, deeply-held love.  This is the place Scott-Phillips finds herself in right now, as she explains: “When I started out as an artist, I didn’t really know what I wanted but over the past few years, I feel like I’m really growing into myself, really turning into the woman I want to be. I’m the happiest I’ve ever been, and I wanted this song to kind of identify who I am at this moment.”

Scott-Phillips told AUK about the single: “‘Handsome Woman’ is a whisper in the dark kind of love song. It’s delicate, it’s vulnerable, it’s for my wife, it’s for me and, most important of all, it’s for all the other women out there who love other women and don’t identify with the ‘boy meets girl’ narrative. My producer, Elliott Beneek, wanted to give the song an intimate quality, ‘Like we’re eavesdropping on you singing to your partner in the sheets.’ A lot of my music has a really big sound so it was fun to do something different and it was absolutely the right choice for this song. My hope is that all the other handsome women out there will find this song and play it to their girlfriends or wives.”

The Aron Meinhardt-directed video is artfully-shot and features intimate moments between Scott-Phillips and her wife, eight months pregnant at the time the visuals were put together.  Scott-Phillips explains: “I wanted the video to be really authentically LGBTQ-focused, because that’s just who I am.  If you’re an artist and you’re writing about your life, I think it’s important to really broadcast who you are.”  Scott-Phillips has an infectiously positive approach to her life and writing: “I’ve gotten to a point in my personal life where I feel so fulfilled, so when it comes to music it’s like, people are either going to like it or they’re not, and that’s fine.  When I started out, like a lot of people, I was trying to be strategic and work with people because I thought it would help me work with other people. Now I don’t really care if any of that happens. I just want to write songs, work with people I like, and when I go to bed at night be able to think, ‘That was a great day, I love my life.’”  It’s a refreshingly straightforward, positive attitude and message we can all learn from.  Allow the emotion to wash over you.