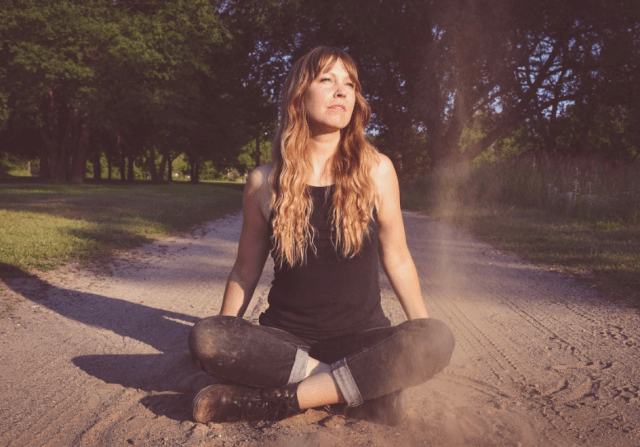 Kelley Smith describes her debut single, ‘Dust’, as: “…a song for grief.”  This heartfelt song was written in response to the death of someone close to her and the words are disarming in their honesty and openness.  The sense of profound loss conveyed through Smith’s emotive vocal is genuinely moving: “The sun came up without you // The world keeps spinnin’ like my head is spinnin’ // It’s all the same // And that’s more than I can bear…Seems like yesterday your hand was warming mine // And now you’ve slipped through my fingers // Dust.”  It feels real and physical, a palpable feeling of strangeness as the contrast of wanting a loved one rests alongside the devastating isolation when they are gone.  These are universal feelings that listeners will be able to associate with and Smith gives voice to how many of us will have felt at times of loss.  Her mournful voice rises and falls over warm finger-picked notes.  The passage of time and the inevitability of change is reinforced by the video that Smith created with her daughter Molly and the shots that show younger and older versions of a central character are particularly effective.  She says of the video: “This music video is 100% DIY, shot with an iPhone by my daughter and I. I think it’s scrappy nature is what makes it compelling. We had such a good time being creative – walking around in matching clothes during golden hour. My daughter had a lot of ideas and didn’t balk at doing several takes in each location. She was a great collaborator. I hope we’ll watch it together here and there as the years go by. If and when she’s a mom and I’m an old granny. Hope you enjoy. Take care.”

‘Dust’ was the first song that the Minnesota-based folk artist wrote.  An original version was posted online early in the pandemic.  It captured the attention of Canadian producer Joel Schwartz, who suggested creating an album and the result is ‘Moon Child’, a five-song EP that has just been released.  As it’s where Smith’s musical journey began, it seems fitting that ‘Dust’ should be released as her first single.  Raised by musicians in the woodlands outside Minnesota,  Smith was always musical but struggled with to find her spoken voice.  Writing songs became a way to articulate her thoughts and feelings freely, without the weight of social anxiety.  She explains: “I was tired of being tongue-tied.  I just wanted to paint little word pictures of what was in my head with no pressure to be profound, or correct or catchy. Just me, my soul, coming out.”  Sure enough, her writing and singing are both full of soul.  Absorb this and be moved.