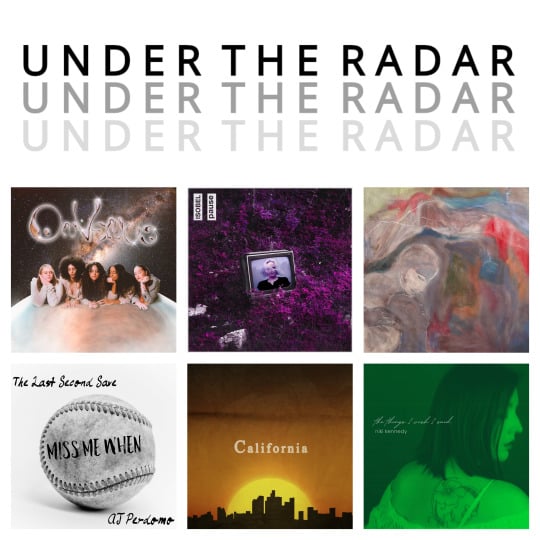 Posting June’s Under the Radar a little late – but goes to show we’re not sleeping on these tracks from NADUH, Isobel, The Day Dreamers, The Last Second Save ft. AJ Perdomo, Grinch Simpson, and Niki Kennedy.

“My bitches got my back until the end of time / this shit never ends.”

If that’s not a crystal clear statement, I don’t know what is. NADUH channels femme energy like no other and wields it as their superpower: the smooth and layered stylings of G-funk and the pro-sisterhood pop mentality of the Spice Girls wrapped into one. The self-produced hip hop/R&B act reps womxn and the strength shown together, defying social narratives of rivalry and competition to achieve success. With lyrics that champion and support one another ‘till the end, it exudes synergy and a breezy sensuality. Each solo drips in honesty and recognition of one’s squad, and the union is felt during the group vocals (”we way up, we stay up!”).

The video takes viewers through a day with NADUH – impromptu photoshoots, Caribbean eats at Baby Dhal Roti Shop (Commercial Drive) and hangs with friends at vintage clothing/streetwear shop The Front Supply Co (Venables Street). Their close bond is evident; a collective laid back vibe, with or without blunt in hand. Celebrating both culture and moxie, it’s fitting visuals for “ON VENUS,” which finds purpose and growth in shared love and respect. Their debut EP HOMIESEXUAL is out now.

Despite a smooth, synth-cloaked delivery, “Pause” digs into deafening feelings with ease.

The track marks an exciting new direction for Vancouver-based Isobel – formerly of The Escapes. Produced alongside Benjamin Paul de Caiman, chill pop beats and more aggressive vocal effects mimic the push and pull of an avoidant lover. Lines like “radio silence is violent / I got bruises inside and out” tug at the heartstrings; a rendering of hurt, lilac hues, disarming eyes. The music video – directed by Adam Harasimiuk at Frost Films – shows Isobel solemn and bracing herself against the television static. It feels like a dream, lingering, where there was love and it was almost so real.

Montreal quintet the Day Dreamers look to the past with kindness on their new single, “Only a Kid.” It is hauntingly delicate – folk rock elevated by its earthy violin and emotional tension. Warm keys, three-part harmonies, and spurring drum rhythms narrate the growing pains. Apologizing when you don’t know how else to fill the silence; trusting the journey as your own.

“Forgive me for the things I don’t know, I was only a kid.”

The accompanying music video features vocalist/guitarist Ali Kouri, paralleled with a younger version of herself (portrayed by her cousin Mia). Filmed at a remote family cottage, it leans into the melancholy of summer.

4) The Last Second Save featuring AJ Perdomo – “Miss Me When”

Nostalgia and growing pains are woven into “Miss Me When,” the latest from Maryland’s The Last Second Save. It’s reminiscent of the early 2000′s pop punk scene: piano-laced, warm spirited, and restless thoughts that linger. Fronted by Jesse Procaccini, the song shows admiration for his parents – a father’s unwavering support over the years, and a mother whose love of music and own health battles is a strength still witnessed to a new generation. While a personal reflection for Procaccini, it’s easily accessible and a sentiment not lost on anyone who has moved away from home. AJ Perdomo’s (The Dangerous Summer) featured vocals adds a slightly heavier spark.

There is much comfort in the simplicity of childhood and those who raised us, an appreciation that is often recognized later on in life. Even through the “darkest days and nights” and “good for nothing fights,” home is the unconditional love we’re lucky to receive (and give back).

Vancouver native Grinch Simpson released his new single, “California,” in June. Penned at a crossroads between comfort and stagnation, the woozy rock number sees melancholy vocals, jangled guitars, and uplifting piano (performed by his dad!) fill the mix. It has a personable and Pacific Northwest feel to it; hints of sweet sky, slow dancing and what-ifs. Grinch Simpson is the moniker of Cam Nelson. His debut album First Thoughts comes out July 29, 2022.

Harboring the ‘what-ifs’ past the fallout is commonplace, and it is okay to feel less than okay. Kennedy’s latest is a testament to her ability to connect through music in overarching themes of grief and regret—be it caused by loss, heartache, mental health, or a combination of situations. I like how it’s not specified for the listener, allowing personal conclusions and journeys to be drawn into her words (“Stuck in former conversations / Circling ‘round on endless replay in my head”). In sound, it’s a brooding alt pop that compares to mid 2000′s pop music with layered, R&B tinted production; the slow and steady rhythm contrasts her soulful, piercing tone.

We have complicated pasts and while answers will always be desired, they may never be found. It’s easy to think about a lack of attention or thought given, lost potential, or a goal that did not reach fruition, but we have to remember that life is rarely fully understood. “The Things I Wish I Said” shares a portion of that healing, honest moments of overthinking to show others that they are not alone.

Written by The Permanent Rain Press

Nigel Beckles on the Virtual Sessions presented by The DJ Sessions ......

Eliot and Olivia Goldberg on the Virtual Sessions presented by The DJ ......

‘Artists know best. Trust them and they will usually steer you in ......

Who is the Highest-Grossing Touring Artist of 2022?