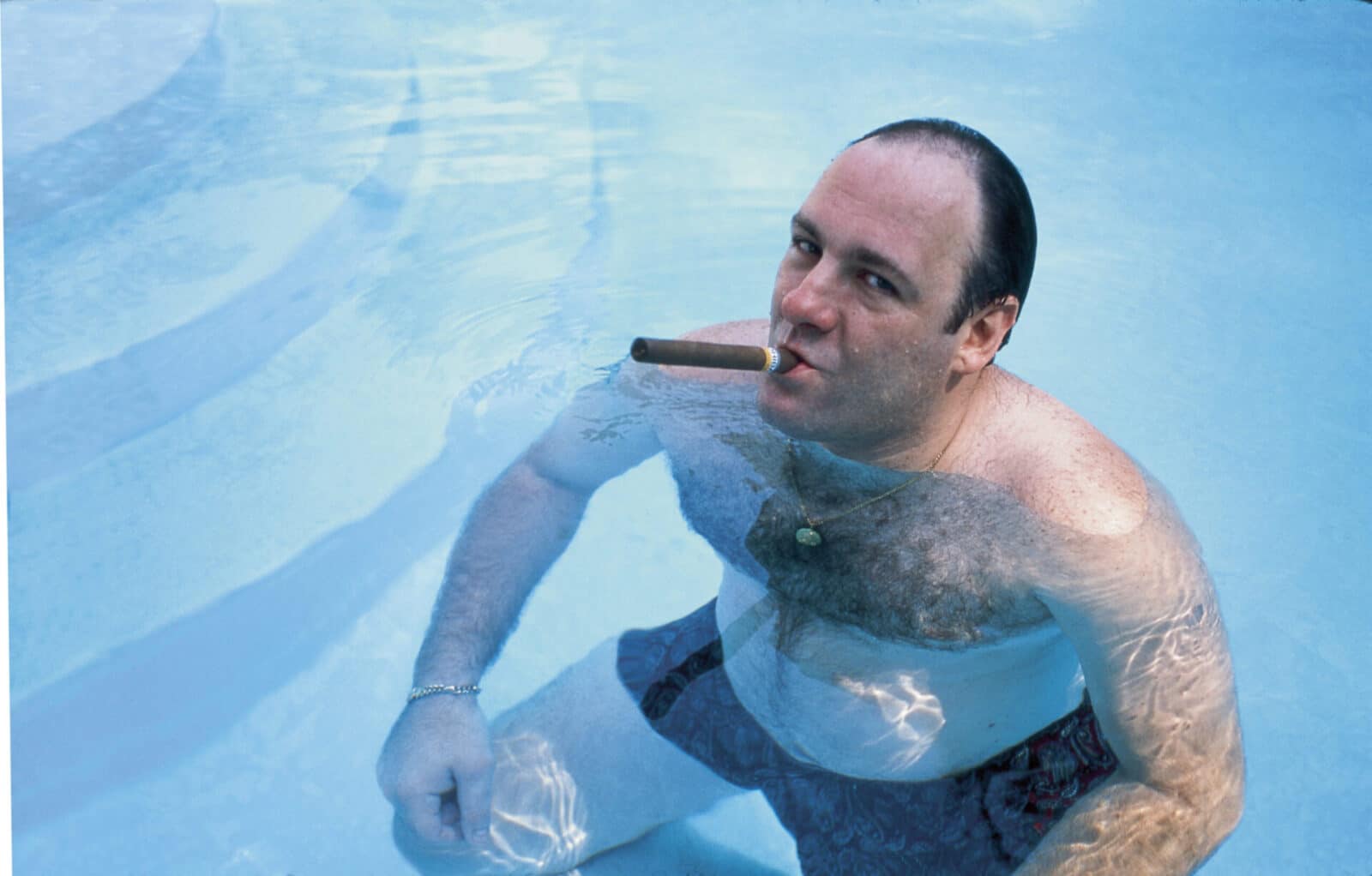 “Give me a hero, and I’ll write you a tragedy.”

There’s an image of Tony Soprano, the patriarch of the North Jersey crime family, that is embedded into my brain: crouched in a swimming pool, gold necklace dangling around his neck, with a big cigar sticking out of his mouth, his cool, dark eyes are fixed upon us. They are taunting the viewer, as if to say, “Yeah, I’m the bad guy, but you’d trade places with me in a heartbeat.”

Truth be told, I’m not even entirely sure if the photo is meant to be a representation of the mafia don or a promotional photo of the actor James Gandolfini. Does it even matter? The two are now synonymous together. The fictional man who loved his family, but cheated on his wife and was a ruthless killer, who tried to get his head right by airing his dirty laundry to a shrink, brought on the era of TV’s antihero. The guy (or gal) you loved to hate.

For Gandolfini, it was the role he was destined to play. After many years of playing minor heavies (True Romance, Get Shorty), Gandolfini shot to stardom by showing a tender side to an otherwise despicable human being.

The Sopranos premiered on HBO in 1999, and since then audiences have had their fair share of irresistible TV antiheroes. These shows became mirrors for the turbulent times post-9/11, where even in our own government, heroes became hard to find.

These complex, morally ambiguous characters came one after another: Tony begat Vic Mackey of The Shield, who begat Don Draper of Mad Men, who begat the meth-king himself Walter White of Breaking Bad. These characters were most often men with insatiable desires, willing to risk life and limb to obtain whatever they felt was owed to them. Over the past few years, female characters began to show their corrupt colors, whether it’s PTA soccer mom-turned-weed dealer Nancy Botwin (Mary-Louise Parker) on Weeds, to Glenn Close’s ruthless attorney Patty Hewes in Damages. Family, it seems, is one of the few links between characters as desperate as Draper, White and Botwin.

Leo Baundy, professor of English and American Literature at the University of Southern California, put it this way: “If any new or relatively new story factor is significant here, I think it’s the addition of family context, whether blood family or family by choice. The Sopranos comes directly out of The Godfather, where whatever the evils of the Corleones, they are a family preferable to the impersonal corruption of politicians and government, and more relatable to the audience. It’s a kind of emotional enticement akin to Marvel’s fallible superheroes, or the X-Men villains (and heroes) with horrible childhoods. Even Ted Lasso, in the second season, is revealed to have a back story that makes [Ted’s] affability not so innate.”

As streaming services grew, and movies dwindled, audiences became increasingly OK with following a protagonist who held few qualms about showing their sinister side. For writers and showrunners, this allowed total freedom with storylines; they were no longer held to the principle that the viewers had to “root for” the good guy. As House of Cards creator Beau Willimon told the Los Angeles Times, “I don’t give two thoughts to likability. Storytelling is an exploration; it’s not about making statements. We have no statement. There’s no agenda to the show.”

To celebrate the 15th anniversary of the last episode (June 10, 2007) of The Sopranos, SPIN takes a look at the greatest TV antiheroes. Let the debate begin.

After his stint as an executive producer on X-Files came to an end, Vince Gilligan felt bereft of ideas. Telling Vanity Fair in 2010: “[A friend and I] were just joking around on the phone about what we should do next: Should we be greeters at Wal-Mart? Should we put a meth lab in the back of an RV and cook meth and drive around the southwest? And that image…I don’t know, it just stuck with me.”

Walter White’s evolution from a family man desperate to provide for his family to the meth kingpin of the Southwest had audiences…well, addicted. Walter White found meaning in his own life by destroying the lives of others. They don’t get more antihero than that.

The Robin Hood of Baltimore, this stick-up man robbed the drug dealers and then sold their own stash back to them at a high markup. Given three-dimensional depth by the superb (and now sadly deceased) Michael K. Williams, Omar Little used his street smarts to beat the game that had held him and so many of his contemporaries down.

And who can ever listen to “The Farmer and the Dell” in the same way again?

The godfather of TV antiheroes, David Chase’s creation is the Big Bang of all Grey Knights. This product of Newark, New Jersey, slowly climbed the ranks of the Italian mob to eventually run the show until his demise in a diner (Oh, you didn’t know? Yup, that, my friend, was a death scene) to the tune of Journey’s “Don’t Stop Believin’”.

Whether it was raising his family, managing his affairs with Lorraine Bracco’s character Dr. Melfi, or dealing with the rival Aprile or New York crew, Tony put a brand new spin on “Father knows best.”

Handsome, smart, scumbag. Don Draper is a man with a past…it just happens to not be his own. Creator Matthew Weiner created a man for whom we root to not get caught cheating on his wife, lying to his children, and being outed as a fraud. Don’s lone redemptive quality? That he was good in the sack.

The ultimate asshole. Kenny Powers is somebody you would dread sitting next to on an airplane, but, as a small-screen fixation, he was the perfect narcissist in constant pursuit of a good time. Even if he was the only one enjoying the moment. On or off the mound, Kenny was always bringing the heat.

It’s Larry David’s world, we just live in it…to annoy him. The bizarro-Will Rogers, Larry has yet to meet a person he likes. Nothing gets Larry out of bed faster than a chance to spite someone: like opening up his own coffee shop next to the one that 86’d him. On the air for 20 years now, audiences tune in to witness Larry’s grudge-of-the-week.

Archie Bunker | All in the Family

Everybody’s favorite racist, Archie Bunker was the complex everyman, a fossil from a different era trying to make sense of the constantly changing society around him. Despite his constant torment of his doting wife Edith, his bleeding heart daughter Gloria and her long-haired Polock hippie son-in-law Michael (aka Meathead), you knew deep down there was a loving father and husband lurking inside Arch, even as he was throwing you out of his house.

Rick Sanchez gives very little fucks. The alcoholic ego-maniacal patriarch of the otherwise boring Smith family does as he wants, when he wants. End of the universe be damned. Rick’s lone saving grace is his clear deep love and respect for his grandson and travel companion Morty. Not that that stops Rick from putting Morty’s life in danger — every single episode.

There’s a certain word that comes to mind when I think of Wendy Byrde…one that the well-mannered editors at SPIN won’t allow me to use. Let’s just say it rhymes with the title of Todd Rundgren’s best album.

Nobody has used crocodile tears in television more than the matriarch of the Byrde crime family. She is manipulative, vindictive, and, as a character in way over her head, irresistible to audiences. We love to hate Wendy. She may be the most despicable of anyone on this list. But if you have a problem with Wendy, you can just suck her cock.

The man who made spousal abuse hilarious. Times were a bit different, to say the least, when the world was first introduced to New York City bus driver Ralph Kramden way back in 1951. As portrayed by “The Great One” Jackie Gleason, Ralph was a working stiff, always frustrated by his lot in life.

With his buddy Ed Norton at his side, Ralph would concoct scheme after scheme with the hopes of getting rich, none of which ever came to fruition. Ralph was short-tempered and full of bluster. But, as with all TV antiheroes, he had a soft side.

One of the most beloved television characters of all-time, Ralph Kramden has been forever immortalized. There’s a statue of him just outside the Port Authority bus terminal in midtown Manhattan. America loves a bad boy.

The post The Greatest TV Antiheroes of All-Time appeared first on SPIN.