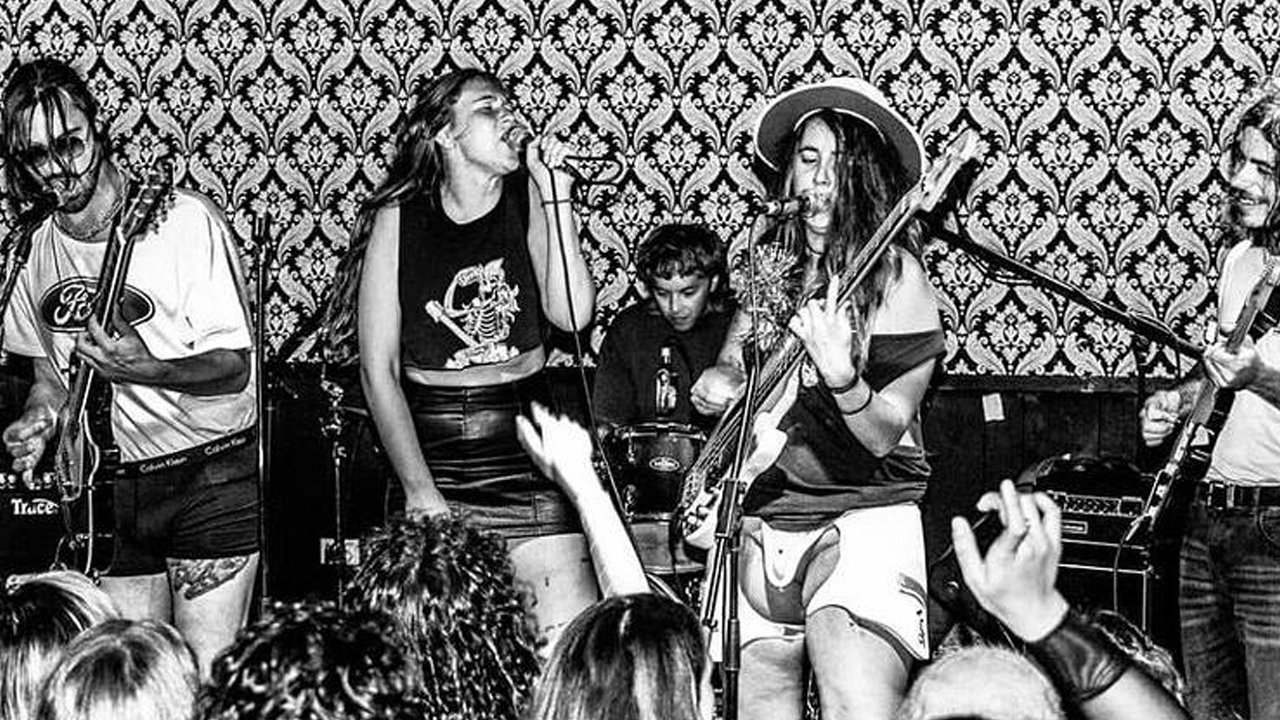 Melbourne band Sandy Dish made their debut in October of 2018, sharing a two-track demo that lasted for fewer than five minutes. Dubbed Gr8test Hits, Rarities, B​-​Sides, Live At Madison Square Gardens: The Early Years (Demos) One More Time, it was a fitting introduction to the Melbourne quintet’s sense of humour.

Sandy Dish have not been immune to the impacts of the ongoing Covid-19 pandemic. But despite releasing their first EP amid lockdown and being forced to delay the live launch of their second EP by seven months, the band persevered, anointing 2022 “The Year Of The Dish.”

Alongside their regular live shows, semi-regular Once A Month podcast, and hilarious social media presence, Sandy Dish have managed to not only record another EP, but also curate a mammoth launch show, with their Big Dish Out festival set to take place on Friday, 26th August in Melbourne, with Zig Zag, Baby Mullet and more joining the bill.

To celebrate the release of their third EP, The Whore That Broke The Camel’s Back, Storti, Fowler and O’Connor joined Music Feeds for a chat about the band’s history, their live shows, their satirical legal battle with the Big Day Out, and the new EP.

Music Feeds: Where does the Sandy Dish story begin? I know you guys first released some music in 2018, but how and when did the band get together and start making music?

Brook Storti: What year was it Andy?

BS: Yeah, the initial lineup was like me, Andy, and my ex, but we didn’t really do anything. We just played, like, one friend’s gig and then he left the band and then we got the current lineup. And that’s kind of where it actually began.

MF: Did you have a particular musical focus in mind at the time?

So it was more that I could get on stage and sing lyrics that I’d written and yell them and dance to them and things like that. And as for topics, they’ve just always been kind of things that I’ve found funny or humorous that are anecdotal to my life or our life now.

MF: Are there any particular artists that influenced either the group’s style or your own style as a frontwoman?

BS: Initially we started the band because I saw RACKETT play. And I was like, “Fuck, that looks like fun. I want to do that.” So it was RACKETT and then – classic – every girl in her twenties got obsessed with The Runaways movie and then The Runaways as a band. So I guess they’re the two main ones.

MF: You had an earlier release online, but it was the God Might Be Gay EP from late 2020 that really gave people a taste of who you were. What was it like to put the EP out against the backdrop of COVID and lockdowns?

AOC: I feel like 2020 was when the band actually became a thing. I feel like when we started it in 2017, it was literally just that Brook wanted to do it. And then it was me and Brook and a couple of people that stopped being in the band, like Brook’s ex and this other guy.

And then when we got the others in – so when we got Tiffany, Lachy, and Willis in – that was in like 2018 and we made those two demos. But then over the next two years, like we were all everywhere; Brooke was living in Port Douglas I think at one point and I was overseas and Willis was overseas.

So it never really, like, properly happened. And we had these songs that we kind of worked on, but it wasn’t until around early 2020 that we recorded, just before the lockdown or something. It wasn’t until that point, when we started really working on that album in earnest, that it actually felt like a real breathing project.

MF: I think the first song I heard from you was ‘That’s Hot’ and it was just refreshing. It was clear everyone was having fun and there was none of that rock’n’roll pretentiousness on display.

BS: [Laughs] Definitely no rock’n’roll pretentiousness in this band.

AOC: I remember when we wrote ‘That’s Hot’. It was like Brook and me and a couple of other people partying. And we were sitting around a room, just like trying to think of things that would be funny to say, like, “That thing is hot”, and that’s why the lyrics are just so random and all over the place in that track.

Sandy Dish – ‘Commit To The Clit’

MF: The first time I saw you live was the EP launch for Album, which took place in February. It was arguably the wildest show I’ve seen in a long time. What is it that you’re trying to achieve when you get up on stage and start playing songs?

BS: Tiff, what do you think when you “hit the stage”?

TF: I think, “I wonder how many times I’m gonna fuck up and Andy’s gonna tell me off.”

BS: I often think that before I get on stage too: “How many times am I going to forget the lyrics?” I guess we do a little prep, but our prep for a live show will obviously be a rehearsal, and then mainly we work out the setlist – we know all the songs pretty well by now. And then mainly we’re always trying to plan like some stupid skit that we could do, like repeating a bit 32 times, and then all taking a pose or something.

Like, I feel like it’s more comical. I’ve spent a lot of my late teens and early 20s going to watch guys sing in boy bands where they all just stood there and played music and didn’t interact with the crowd. And I find it so god damn boring. So I guess it’s more that we are all just trying to interact, have fun, make people laugh, and to make it more enjoyable.

TF: But that just comes so naturally because we’re all super close and we’re the best of friends and have so many in-jokes with each other.

BS: Which I do question whether the crowd gets sometimes.

MF: That’s something I enjoy about your shows, because it sort of feels like the audience has been welcomed into band rehearsal in a way. It’s casual, there’s this level of banter that removes the barrier between artist and fan, and it basically feels like you’re all having as much fun as everyone else is.

BS: That’s something Andy always says – he wants our fans to feel like they’re part of the friendship group. Not like it’s viewer and performer, but rather that we’re all in it together.

AOC: It’s like you’re in on the joke. We do have all these in-jokes, but also we’ll just talk to each other so much on stage, because we’re all just warm, open, and inclusive people. I’ve always wanted people to feel that from the band and I think that’s why we like to have a lot of content that we do, like the podcast and all this different shit so that people can feel like they’re a part of the Sandy Dish family or something.

Sandy Dish – ‘Nobody Can Love You Harder Than You’

MF: What do you feel is the most memorable thing you’ve done on stage?

BS: I really liked the show you saw [at The Tote in February] where my friend Lola pulled out my tampon with her teeth and then I threw it at this poor girl in the crowd who thought it was fake.

BS: I also remember when Andy got really coked up and everyone was yelling “Encore” at us and he went out in his little tighty-whitey underwear and was yelling, “Fuck off! We don’t have any more songs!” The poor crowd.

AOC: I was giving them all the finger and just yelling, “Fuck you, and fuck you…” It’s punk. Lachy called that “the meltdown.” I liked when Lachy said not to talk about his massive dick on stage and then Brook started talking about it. He said not to bring it up on stage and Brook did, and it was adorable and he was embarrassed.

And also when Lachy’s mum came to the show and Brook started saying to Lachy’s mum to get her tits out, and Lachy was saying like, “It’s okay, mum. You can do it.”

MF: What can you say about the vibe of the new EP? ‘Dump Him’ definitely feels like a continuation of what came before.

BS: I mean, why tarnish a good thing? Let’s go do the same thing again. No, I don’t know. I guess we’re not like, “Oh, we’re going sit down and write this motherfucking album that is going in this direction, and it’s totally crazy and different to the last time we did this.” We’re purely just sitting around, talking shit, and like coming up with funny ideas. Or usually it’s a conversation where we’re like, “We should turn that into a song”, and then the song gets written.

So I guess Sandy Dish is very much the sum of our personalities, so it probably will always continue to be the same vibe. Whether that’s gonna be negative or positive in the future, who knows?

MF: The launch show for the EP, Big Dish Out, is later this month. It’s got an amazing lineup. How does it feel to be putting on a show like this?

BS: Yeah, it’s so exciting. It was Andy’s idea to do it and when all the bands that did say yes said yes, we were obviously very excited.

AOC: We wanted to do a festival and just rip off the Big Day Out. And as soon as that became a funny idea, I think we just became committed to doing it as an actual festival. So yeah, it’s cool that it came together and so cool that everyone said yes. I think it’ll be fun.

MF: Well that leads to my next question, because you guys have been sharing some stuff on social media speaking about a supposed cease and desist from the Big Day Out. I just love the idea of the festival emerging from an eight-year sleep to put a gig like this in its sights.

AOC: It’s really scary. We’re really frightened about the legal proceedings, but Miami Daquiri, our manager, is taking on the case and we’re willing to go to the Supreme Court if we need to; International Court. Whatever we need to do to defend our right to satire.

MF: Fight the power, defend the Dish, all that sort of thing?

TF: Are you a lawyer?

Love Letter To A Record: RACKETT’s Ally Gaven On ‘Rage Against The Machine’

The post Sandy Dish: “Fuck Off! We Don’t Have Any More Songs” appeared first on Music Feeds.