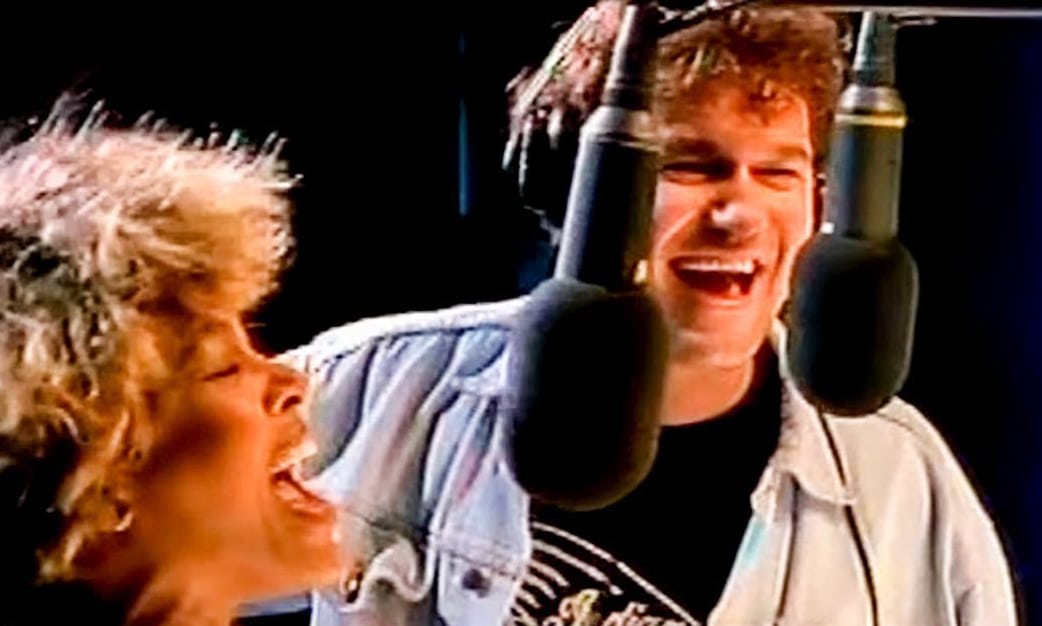 This year’s NRL Grand Final is headlined by none other than Jimmy Barnes. He’ll be there with Diesel, John Teskey and Emma Donovan. Bliss n Esso and Sheldon Riley will also performa along with Barnesy’s daughter Mahalia Barnes, performing The Real Thing with A. Girl and Emma Donovan.

With such missteps as Billy Idol’s embarrassing power cut, Jessica Mauboy‘s lip syncing controversy and the cast of Neighbours singing the national anthem, the one thing you can bet is that when the chips are down and grand final entertainment needs a boost, Barnesy is always there to deliver the goods. There’s only one human on the planet that could have muscled in on Tina Turner‘s turf without the world minding and in 1992 the league’s love affair with Jimmy Barnes was cemented.

Despite this not being a Grand Final performance, the story really needs to start here. Tina Turner‘s The Best was used in the NSWRL commercials in 1990 to great effect and in 1992 the league decided to refresh the ads and go one better, adding in national treasure Jimmy Barnes (and the word Simply in brackets to the title). In his autobiography Working Class Man, Barnesy stated “In 1992, the NRL asked me if I would consider joining Tina in the TV ads. This meant I would have to travel to Holland to record and make a film clip with her. They would pay me a fortune. I had to bite my lip from laughing. I would have paid them to get me to sing with her. It was one of the great moments of my life to stand next to Tina as she sang in the studio.”

The song was a smash hit, hitting #14 on the charts and becoming the game’s unofficial anthem to this day. Curiously, the league brought Tina Turner out to perform at the Grand Final in 1993, but chose for her to perform solo. We’d love to have seen Barnesy out there with her.

Just two years later, the (then) ARL decided that a working class game needs a Working Class Man (which he also performed at the match) and Barnesy delivered in 1995. Riding in on the back of a motorbike, this was about as meat and potatoes a performance as you can get. Of course the obligatory hundreds of dancing children were needlessly scattered across the field doing inappropriate dance moves, but it just wouldn’t be Grand Final entertainment without it. But the real star of the performance was the saxophone player.

Just two years later and the great man was back at the final to deliver on The Best performance that he was missing from in 1993. What wasn’t missing? The forty bajillion children holding banners that made the logos of the clubs. A bunch of bemused officials looking awkward about being on the stage. And some cheerleaders reminding us why cheerleaders aren’t a thing anymore.

In 2001 we were into the era of night grand finals and Barnesy brought his daughter along for the ride taking the Tina Turner parts to revisit the song that will forever be the NRL anthem, The Best. At night you don’t need the kids dancing on the field because you can have Fireworks! In a bad omen for Parra fans, they went down to the Knights in 2001…

Just seven short years ago, Barnes returned to the field, this time with his Cold Chisel bandmates in tow. Ripping through a short greatest hits set kicking off with the evergreen Khe Sahn, Triple M labeled this performance “one of the greatest pre-match entertainment performances you’ll see anywhere in sport”. That’s a big call, but we’re not going to disagree with Triple M on the NRL.

Barnesy returned to the scene of the crime in 2020 with this great new version of The Best for Fox League. The video clip was recorded in the ruins of the old Sydney Football Stadium with scenes from matches gone by beamed onto the rubble. Emotive and poignant, the video got a little lost in the COVID rubble that was 2020, but reminded us that thirty years on, The Best is still….. well, The Best!

Jimmy Barnes has once again been names as Sunday’s headliner. What song do you think he’ll perform? We couldn’t even start to guess. One thing’s for sure. If he doesn’t pull out The Best, we reckon he might need security to escort him from the ground.