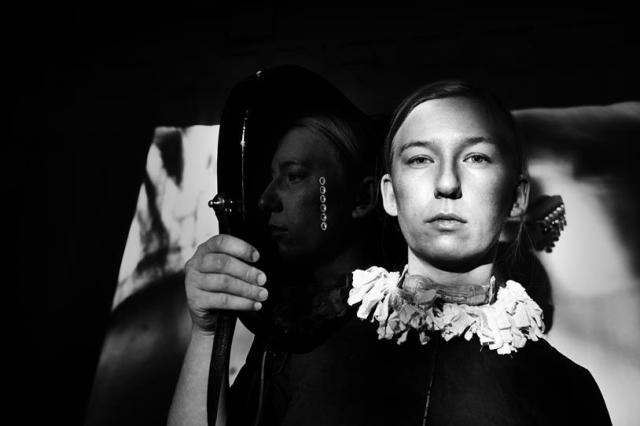 Ahead of her new album ‘Den svenska vreden’ (released on 27th January via Medication Time) the Swedish experimental rock and dark pop communicator Fågelle has just revealed a third preview track Kroppen. Following on from the elevating electronic surge of Kar i vem som heist and Ingenting’s delicate grandeur, Kroppen extends the dynamic with a nostalgic nod to guitar sounds and rock balladry.

Those connections filter through from the presence of Swedish punk icon Joakim Thåström, singer/guitarist with seminal 80’s alt rock bands Ebba Gron and Imperiet, who shares vocals with Fågelle on the song and stands as one of her musical idols. No surpirise then that working together brought added emotional resonance to Kroppen which the songwriter admits for her ‘was an unreal experience, a full circle moment’.

The track itself captures the key musical elements that distinguish Klara Andersson (aka Fågelle) as an artist. The found-sound fringes, the vocal expression, the melodic focus and the potent surges are all played out here. White noise and rumbling radio signals set up the tension before Kroppen uncoils to a creeping guitar chug and earthy harmonium hum. It’s a song that pivots around a spine-tingling chorus and the contrast between Andersson and Thåström’s voices, Fågelle’s clear, crystalline, aching and her counterpart’s deep, worn, almost wearisome.

Intense, anguished but deceptively hopeful, the rage, power and beauty of Fågelle’s statements look set to make bigger waves when the ‘Den svenska vreden’ album rises at the month’s end.

Pre-order your copy of ‘Den svenska vreden’ by Fågelle for your local record store or direct from: https://fagelle.bandcamp.com/album/den-svenska-vreden