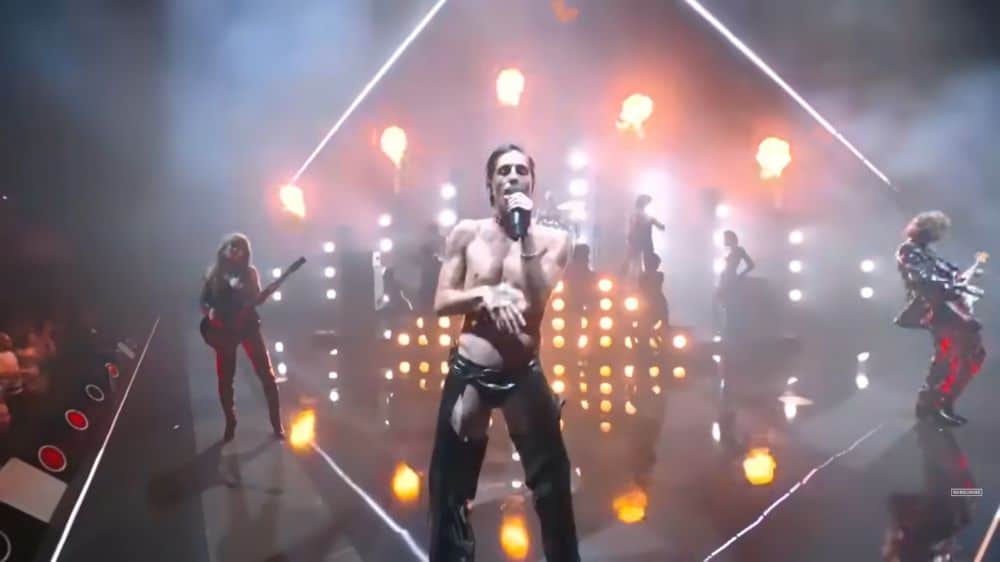 The Italian rockstar’s top fell off midway through the band’s performance of their hit ‘Supermodel’.

MTV producers adjusted their filming in response to De Angelis’s top falling down, cutting away awkwardly to shots of the audience during segments of the performance, so as to avoid showing her topless on the broadcast.

As is standard for her performances with the glam rock group, Angelis took the stage wearing a top that had the left side of her chest bare and a ‘pasty’. When De Angelis joined a group of dancers at the front of the stage, the top covering the right side of her chest fell down, prompting MTV to censor the remainder of the performance.

From this point onwards, the camera remains principally fixated on similarly scantily clad vocalist Damiano David, whose ass-less chaps MTV seemed to have deemed more appropriate for viewers to focus on than the ‘topless’ De Angelis.

The decision to censor the performance has caused a furore online, with fans of the act feeling the choice ruined the broadcast of what should’ve been an ‘iconic’ moment for them.

Additionally, the choice to censor De Angelis has brought into focus an industry double standard when it comes to ‘nudity’ in broadcasting, with several people indicating it is another example of male and female performers being held to different standards.

The cultural conversation has been intensifying since Tommy Lee posted an uncensored dick pic to social media a few weeks ago.

The pic remained on display to Tommy Lee’s  1.5 million followers on Instagram and Facebook for several hours before eventually being removed by the Meta censors. Incredibly, the picture is still available on Twitter as of writing.

Predictably this mischievous mishap from Tommy and his member, sent the internet wild. Adding to the viral nature of the post, the infamously well-endowed muso has shown no remorse for the post but is instead doubling down on his actions, continuing to poke fun at the incident and court notoriety by making several phallic references across his social media.

A global conversation started about why the picture was able to remain up for so long when considerably less lewd pictures of women are routinely censored within moments. The company has yet to comment on the matter.