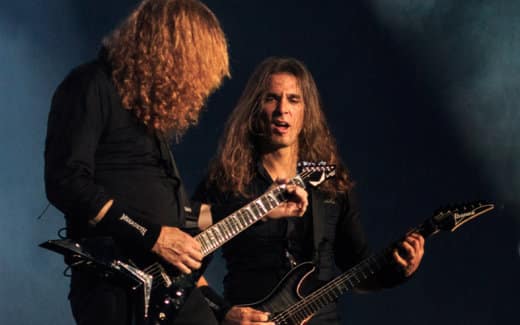 Earlier this summer, Megadeth frontman Dave Mustaine made headlines when he flipped the fuck out on a Judas Priest roadie for conducting a sound check near the stage during a festival in Barcelona. Video circulated around the interwebs that showed the 60-year-old flipping the unseen guitar tech off while calling him a “fucking pathetic, amateur piece of shit.”

It wasn’t really a good look on its face, but some have come to Dave’s defense, including Dragonforce guitarist Herman Li. Today, you can add another name in Dave’s corner — his bandmade and ex-Angra guitarist Kiko Loureiro.

The Brazilian guitar player (and nice enough seeming dude) defended Mustaine while fielding fan questions for a Q&A series he does on his YouTube page. Looking back on the “event,” as he calls it, he says that the incident that led up to the blowout was an annoyance while the band played its set.

“Megadeth was playing and the Judas Priest tech started a soundcheck during our concert. I don’t know if the crowd could hear, but because the stage was right there, we could clearly hear the guitar. Dave was not happy about that…I understand why he was complaining because it was not very polite. It’s not very professional. Maybe it was a not very experienced tech or didn’t care, I don’t know. It wasn’t very nice of them.”

Though he wasn’t willing to lambast the tech completely, Kiko eventually said he understood where Dave was coming from, saying there’s a sort of agreement among bands when performing large festivals or tours.

“All the bands respect each other and when you’re playing, you know you have to do your line check and stuff. They [Judas Priest] were playing right after us, so of course they can prepare their things. But you don’t need to play loud guitars. A professional tech will do it in a way that doesn’t disturb the other bands that are at the concert.

“That’s my point of view and Dave was totally right.”

While Kiko stands up for Dave, the situation blew up because it’s a bit of a power imbalance. Should the tech have been doing what he was allegedly doing? Nope. Should Dave have cursed the guy out in front of thousands of fans because he’s the only one with a microphone? Maybe not.

I don’t know how I would have handled that situation. I’m not a famous musician playing to massive crowds and while I’d like to say I’d be level headed about it, that’s an impossible point to make.

In the end, we got to see a classic Dave blowout and Kiko got some added content for his YouTube page.