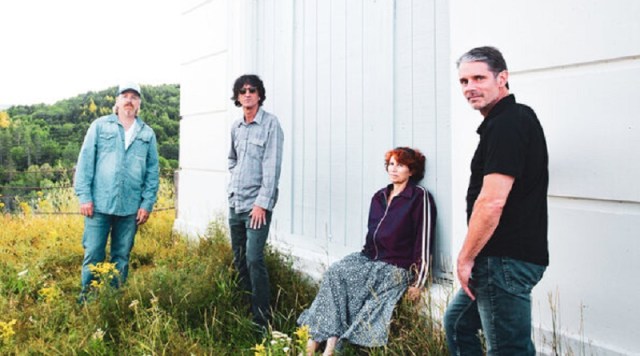 The title track of the new album from Maple Run Band tells the age old tale of the band who were being hyped for success that never quite arrived –  and suddenly “your time” is only visible in the rear view mirror, and somehow you’d missed the turning.

The band’s vocalist and songwriter Trevor Crist says of the songs on ‘Used To Be The Next Big Thing‘ that “most of the songwriters that influence me typically aren’t confessional, so as a result, I’m almost never the protagonist of my writing. I always try to find the voice of the character and let them speak in the song. Our last album had a number of storytelling songs but that were based on actual experiences or places that I’d been, but for this one I wanted to push it to be pure fiction.”

To record their sophomore LP, Maple Run Band – comprised of Crist, drummer and vocalist Nicole Valcour, guitarist Bill Mullins, and bassist John Spencer – retreated to Crist’s home studio in Northern Vermont, hunkering down through the Winter to arrange and track the album, with Crist acting as the primary producer. The band then brought in their long-time collaborator Joe Egan to mix the album, as well as Grammy Award winning mastering engineer Emily Lazar to put on the finishing touches. To round out the record, Crist and Valcour tapped banjo player David Kammerer and cellist Nelson Caldwell, their former bandmates in the ‘90s alt-country band Construction Joe. “Recording at home, and producing everything ourselves, is perfect for us because we have all the time in the world and a ton of freedom,” says Crist.