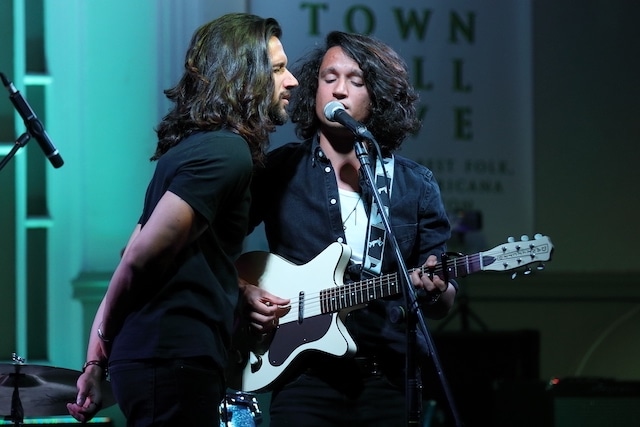 The half hour journey between my home town of Lincoln to the county’s premier Americana venue The Town Hall, Kirton In Lindsey, takes me through the arable countryside, well known for being the breadbasket of the UK. On my last visit back in June the landscape looked very different, the fields heaved and swayed with the rapidly ripening crops, the sun still high in the sky as we approached the longest day, while the early signs of the dry spell were already visible along the furrows and the verges. Fast forward two months and the view has certainly changed. The unprecedented heat, the culprit of an early harvest that now find the fields naked exposing the full extent of the on going drought is a sobering reminder that neither time nor Mother Nature are ever still or idle, even if we are, and that our recent enforced inactivity is time gone, no matter how much we try to play catch up.

These thoughts are still permeating through my mind as I arrive, but now my focus is on tonight’s headliners, The Blue Highways, and how the effect of the last two years have impacted on a young band who in 2020 released their highly acclaimed  debut album, ‘Long Way To The Ground’, just when the world was grinding to a halt, enforcing a succession of gigs to be cancelled, then rescheduled, only to be cancelled again. Keeping the momentum going for this London outfit during these last two years must have been challenging though a trip back into the studio last summer to record the EP, ‘I Wanna Party’, along with high profile gigs such as this years Maverick Festival will have certainly helped.

The Blue Highways are a four piece band made up by three brothers, Callum Lury on lead vocals and guitar, Jack Lury on lead guitar, and Theo Lury on drums and backing vocals, along with newest member Joe Hazell on bass, and tonight is their first visit to the Town Hall. The gig is well attended and the regulars are quickly alerted to the stacks of amplifiers and drum kit at the back of the stage suggesting tonight’s show will be a little different from the usual acoustic ambience. That said, the opening number clearly appeared to catch a few people out, still ordering refreshments from the bar as Callum, guitar in hand, and Theo, ambled nonchalantly and unannounced  on to the stage to stand around one microphone, and with harmonys only siblings can deliver give us a wonderfully atmospheric rendition of ‘Tonight’, despite the slightly distracting clatter of bottles and glasses coming from the bar. From here the remaining members of the band joined the stage and with the congregation now all in their seats the music was cranked up and The Blue Highways proceeded in delivering their very own brand of high octane rock’n’roll. Songs from the debut album such as, ‘Blood On Your Hands’ and ‘Matter Of Love’ quickly had them up to full throttle, the sound bouncing of the walls, down the hall and very possibly out on to the streets, all driven by the engine that is Theo’s drumming and underpinned by Hazell’s bass giving the impression he’s been occupying that role for years rather than just weeks. Next comes a track from last years EP, ‘She Moves’, which keeps the pedal to the metal before things slow down and the band take their first opportunity to pay reverence to ‘The Boss’. The Blue Highways have never shied away from the influence that Bruce Springsteen has had on their music and tonight we get a heartfelt rendition of ‘Tunnel Of Love’, which Callum sings with a maturity and compassion that belies his years. This gentler pace is continued with ‘Have You Seen My Baby’, the final track from the debut album before leading into a number as yet still unreleased, ‘Rio Grande’, where Jack provides some scintillating fretwork on the intro.

After a short interval where the band spend most of the time chatting to members of the audience the second set gets underway with a relatively old number, ‘What’s A Man To Do’, before introducing two new tracks which presumably will be on the forthcoming album, hopefully due out early 2023. There is definitely a suggestion of a slight musical shift with these new songs, a hint of indie rock, clearly a conscious attempt by the band to create their own musical identity without straying too far from their roots. To these ears at least there’s plenty to like and get excited about and it certainly whets the appetite for what’s to come in the new year. However, for the time being at least things return to a more familiar terrain with another Springsteen number, this time ‘Cover Me’, a version of which first appeared on their debut album. The cover versions continue but from a distinctly less obvious source and there’s certainly a few raised eyebrows as they take on Katy Perry’s ‘The One That Got Away’, pumping it full of energy and pulling it off with aplomb. As proceeding come to a close the crowd that had been vociferous with their appreciation through out the evening bayed for more and are rewarded with a barn stomping version of ‘Can I Get A Witness’ with Callum’s vocals every bit as powerful and soulful as Southside Johnny’s way back when the Jukes were rocking’ the New Jersey bars and clubs. A truly wonderful performance.

A special mention should be reserved for tonight’s support act, Rich Hardcastle and Evie Rapson, who some may know from the work they have done with Dan Webster on his album ‘Devil Sky’ from 2018. Tonight they are performing as a duo for what appears to be the first time with Hardcastle hinting that Rapson had to be talked out of retirement. If that’s the case, it was well worth the ‘twisting of any arms’ as the duo’s voices work sublimely together, creating a sound that is both warm and ethereal. The relatively short set includes songs from Hardcastle’s solo album, ‘Rudy’s Bar And Grill Album’, released in 2021 along with cover versions such as Bob Dylan’s ‘Tomorrow Is A Long Time’, on which Rapson has the audience in the palm of her hand, hushed to the point you could hear a pin drop, as her pristine voice transports us all to a different place and possibly a different time. One can only hope that this was not a one-off performance from a duo that clearly work so well together.