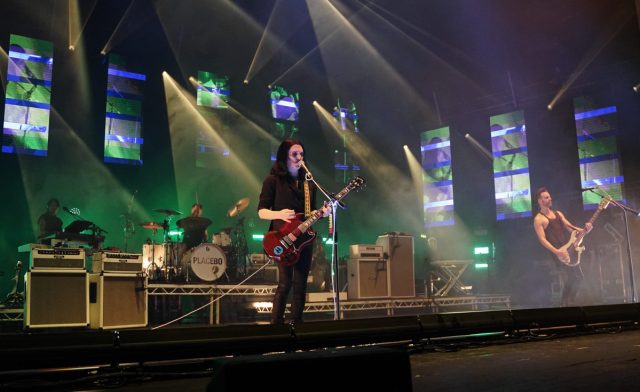 It’s been a long time in coming ‘Placebo’ finally on tour playing two dates at Brixton Academy. A venue that has had many iconic artists playing there over the last decades. The latest’s ‘Never Let Me Go’ Tour is a showcase for the latest album which was released in March this year and after extensive world touring before the pandemic it’s been a decade since their last full studio release and the band have always been determined to follow their own style and path in comparison to the Brit pop bands of the 90’s era!.

Placebo formed in 1994 by vocalist Brian Molko and guitarist Stefan Olsdal and burst onto the alternative indie brit pop scene with their self-titled debut album which was a phenomenal success in the UK album charts!

For the first London show the support was ‘Cruel Hearts Club’ The London based trio consisting of ‘Ede Langley, Gita Langley and Gabi Woo turned their backs on their classical music training to explore their darker past with some grimy 70’s style glam rock guitar riffs.

The band have has some impressive accomplishments, having supported the likes of The Libertines and had a successful single launch at ‘The Lexington’. Tonight they opened up the show to an eager crowd with some fuzzy guitar and infectious choruses! Their single Blame Me Too is the most catchy and addictive and shows how ‘rock and roll’ is done on a big stage and you can see the band on course for more success!

With the lights dimmed, Brian Molko’s Voice politely announces that the audience is to refrain from using their phones for photos and this is greeted by huge applause and is displayed across the neon screens at the back of the stage to ‘please be here and now in the present and enjoy the moment’!

The dark opening chords of ‘Forever Chemicals’ are played to a more sinister tone and theme of drug use and isolation!  ‘Beautiful James’ follows in more of a singalong anthem with long riffs, another song taken from the ‘Never let me go’ Album!

‘Hugz’ is a more angular in your face track that picks up the pace for the evening with more of the crowd head-banging joyously at the front. The Piano is beautifully played for ‘Too many Friends’ by Stefan Olsdal in contrast to the harder and faster signature Placebo set and their beginnings as with ‘Bionic’!

Over the years Placebo sounds have remained unchanged but the newer material picks up the pace and is testimony to the times we live in and tonight Never Let me go was played in almost its entirety with the proceedings being watched without a sea of mobile phones!

To a surprise the set encore is closed with the politically inclined ‘Shout’ and the bass heavy Kate Bush cover ‘ Running up that hill’ Placebo deserved the large applause received tonight with the band pulling off a phone free show enjoyed by everyone!

Scene of the Crime

Happy Birthday in the Sky

For What it’s Worth

Slave to the Wage

Song to the Wage

Running Up That Hill (A Deal With God) – (Kate Bush cover)

Bad Bunny’s Show-Opening Performance Was a Milestone Moment for ...

Bad Bunny’s Show-Opening Performance Was a Milestone Moment for ......

SKINNY PUPPY To Embark On Final Tour In Celebration Of 40th ......

Charlie Thomas, Longtime Member of the Drifters, Dies at 85