In an ever-expanding global electronic music scene with new artists appearing every day, it takes nothing short of raw talent to stand out. As one of Canada’s leading trance artists, Somna earned the 45th in the DJTOP100 (TrancePodium 2019), making him the highest ranked Canadian within the top 100. His music can be found on the biggest trance labels in the world including Armada Music, Enhanced Music, Coldharbour Recordings, Garuda Music, Future Sound Of Egypt, AVA Recordings, Black Hole Recordings and Perfecto. One of few trance artists bypassing 200,000 monthly listeners on Spotify, Somna’s music regularly finds itself on the playlists of Armin Van Buuren, Above & Beyond, Markus Schulz, Ferry Corsten, Gareth Emery, Cosmic Gate and more. Reaching beyond his talents of songwriting, Somna is also a highly sought-after remixer, having remixed for the likes of Markus Schulz, BT, Paul Oakenfold, Andy Moor, Menno de Jong and Lange.

As a performing artist, Somna fuses together traditional mixing with current technologies in a way that takes fans on a journey of what trance is truly about. His experiences with prior aliases over the years have led to performances at Global Gathering, Creamfields, Coloursfest, Eden (Ibiza), The Arches (Scotland), LoveFest (USA), and shows across Canada, UK, USA, Japan, Spain, Australia and New Zealand. As Somna, he has taken his music to the main stage at Dreamstate in Southern California, Colosseum in Jakarta (Indonesia), Womb in Tokyo (Japan) and events in Norway, Netherlands, Switzerland, Mexico, United States, United Kingdom and Canada.

As the label manager, A&R, and co-owner of AVA Recordings, Somna continues to make strides while playing an important role within the scene. His bi-monthly radio show entitled “Reanimate Music” broadcasts every first and third Wednesday on Digitally Imported (di.fm), the #1 online dance radio station in the world. With a promising outlook on the future, Somna continues his artistic journey with a steady stream of music on the scene’s best labels as well as a tour schedule with stops around the world. 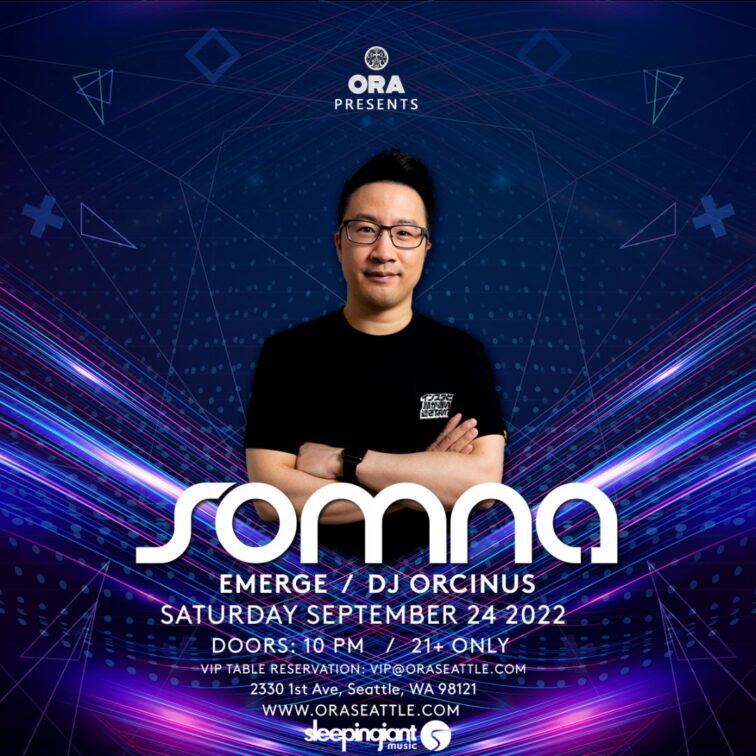