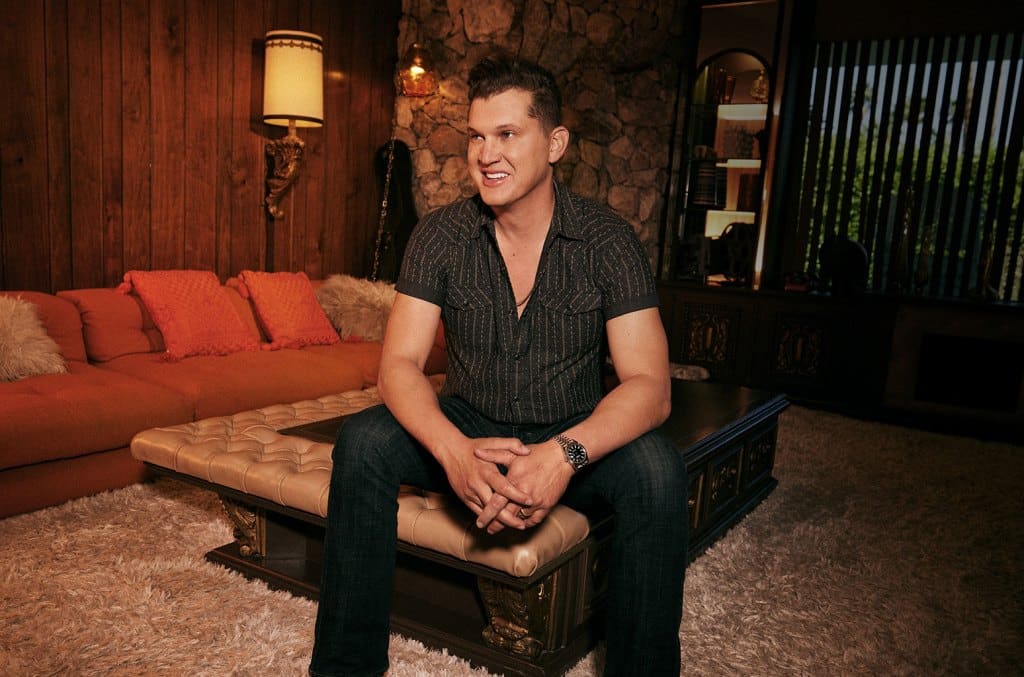 “It’s reminiscent of [Pardi’s 2019 top 5 Country Airplay hit] ‘Night Shift’ just a little bit — and we loved that kind of sound, the fiddle solo. We felt like it would be a big radio single, but we didn’t know it was going to fly up the charts like that.”

“It’s nice to see this song shooting up, so hopefully we get more singles from this album,” Pardi says.

Over the past year or so, a throng of modern country artists have weaved threads of ‘80s and ‘90s country sounds into their music, with chart-topping results. But Pardi is by no means a bandwagon-jumper: His music has been anchored in classic country sounds, glossed with a modern patina, since his 2012 debut single “Missing You Crazy.”

“I think it’s more glorified now than ever,” Pardi says of the ‘90s country craze. “For me, it was always just kind of what I thought country music sounded like. That’s why I always had a little bit of it, but still modern. I’ve toured with people like Alan Jackson and Brooks & Dunn and you want them to like what you do. The coolest thing is just hearing them say, ‘Keep doing what you’re doing.’ I’m happy that people are more accepting of the more traditional, ‘90s kind of sound.”

Pardi grew up in Dixon, California, just over 20 miles southwest of California’s capital in Sacramento, and less than 50 miles away from the site of the famed Folsom State Prison, where music legend Johnny Cash performed a pair of concerts in 1968 that resulted in his famed live album At Folsom Prison.

Informed by both California’s rock-and-roll influenced Bakersfield sound of the ‘60s and the devil-may-care defiance of artists such as Cash and Bakersfield icon Merle Haggard, Pardi has blazed his own trail over the past decade. As with his previous three albums, Pardi’s Mr. Saturday Night is an homage to beer-soaked, neon-lit barrooms, ice-cold longnecks, wide open spaces, and the complexities of life, love and loss, spread out over 14 songs. Strait-esque tributes to lasting love (“The Day I Stop Dancin’”) sit comfortably alongside more light-hearted, barroom fare (“Fill ‘Er Up”). Working again with producers Bart Butler and Ryan Gore, Pardi co-wrote five songs on the project, including “New Place to Drink” and “Santa Cruz.”

For Pardi, Mr. Saturday Night is a long-awaited project, coming two pandemic-ravaged years after his 2019 album Heartache Medication, which earned album of the year nominations from the Academy of Country Music and Country Music Association. If the songs here sound fresh, yet also comfortably lived-in, it’s because they are.

“These are songs that I’ve had on hold for two years, that have been part of this project for a long time,” Pardi says. “They stuck around and carved their names into this album and it wouldn’t sound the same without them. Everything fits, from the ones I’ve written, the ones I’ve recorded, they’re all based around me and in the long run, a lot of these songwriters know the sounds that I gravitate toward.”

Pardi’s honky-tonk energy melds seamlessly with Texas trio Midland’s smooth ‘70s country vibe on the raucous “Longneck Way to Go,” which also previously appeared on Midland’s The Last Resort project. Pardi’s vocal contribution to the song, penned by Midland with Ashley Gorley and Rhett Akins, proved a full-circle moment, as Akins had played the song for Pardi long before Midland extended the invitation. Pardi says making the video was just as enlivening as being in the studio.

“It was completely chaos. You can tell how much fun we were having,” Pardi recollects of teaming with Midland’s Mark Wystrach, Jess Carson and Cameron Duddy to film the song’s video in a Nashville-area bowling alley. “It was a full open bar from 9:00 p.m. until 1:00 a.m.”

Pardi crafted “Smoking a Doobie” with Laird and Rhett Akins while Pardi was out in New Braunfels, Texas, playing three shows at the Whitewater Amphitheater, near the Guadalupe River. “We thought it could be such a ‘Margaritaville’- type thing, just doing whatever you can do to relax,” Pardi says. The song also offers a passing nod to the deep roots of Hispanic culture that canvas not only Texas, but country music and cowboy culture, with Pardi singing “Adios, trabajo” (“Bye, work”) and “Uno mas cerveza” (“One more beer”).

“There’s a lot of Spanish culture in the area, a lot of Spanish speakers, and they love country music,” Pardi says. “It was just fun to throw that in there, just keeping that easygoing mood.”

Pardi initially balked at the risqué title of another track on the album, “Reverse Cowgirl,” until producer Butler persuaded him to give it a chance — especially since the title is a clever play on words. “I was like, ‘I don’t know if this is gonna work.’ But he said it was written great. It’s fun, but sad at the same time. Girls seems to love it. [My wife] Summer and her friends laugh and just think it’s all around good fun — and you know, I think in the end, he gets his girlfriend back. That’s all I’m saying.”

Pardi is currently headlining his Ain’t Always the Cowboy Tour — and taking a cue from the trek’s title, he welcomed “Heart Like a Truck” hitmaker Lainey Wilson and “Everything She Ain’t” singer-songwriter Hailey Whitters to open the shows for him.

“Lainey and Hailey are great friends and when we asked them to be on the tour, they were all in. I didn’t even ask anybody else, because we are all friends and have that history,” he says. “I really had my fingers crossed that I could get both of them for the tour, and it worked out.”

When Pardi is not cranking out music, Pardi is living what he writes about: riding horses, working on his 40+ acre Nashville property and tending to his cows and goats. He would also like to try his hand at acting. With Pardi’s natural riding and roping abilities, he would seem a natural fit to join his tourmate Wilson, who recently snagged a recurring role on the hit series Yellowstone.

“I’d be up for that, just something that is challenging and fun. It’s really demanding though,” Pardi says. “Lainey, when she’s on tour, she’ll fly out to Montana to work on that. She’s a tough girl, and I’m proud for her. I think it’s gonna be awesome and think she’s gonna do great in it.”