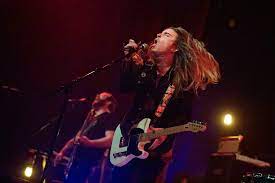 Holy Fawn, whose eagerly-awaited new album, Dimensional Bleed arrives Sept. 9 via Wax Bodega, have released a cinematic video for “Void of Light,” with the Chase Warren-directed clip featuring a muted color palette that mimics the imagery around the upcoming release.

“I’m not sure what it is about our nature as musicians but at our core, we love to tinker,” explains Ryan Osterman. “Whenever we get something new, we have to set it up and hit record just to see what happens. For ‘Void of Light’ in particular, it was a new reverb pedal from a company called ‘Dr. Scientist.’ It’s called ‘the atmosphere’ and I feel its name is pretty self-explanatory. This pedal truly felt so expressive and opened up so many creative avenues for us to revisit over and over again. Once it entered the studio, it just didn’t get turned off. // Continue to the full article