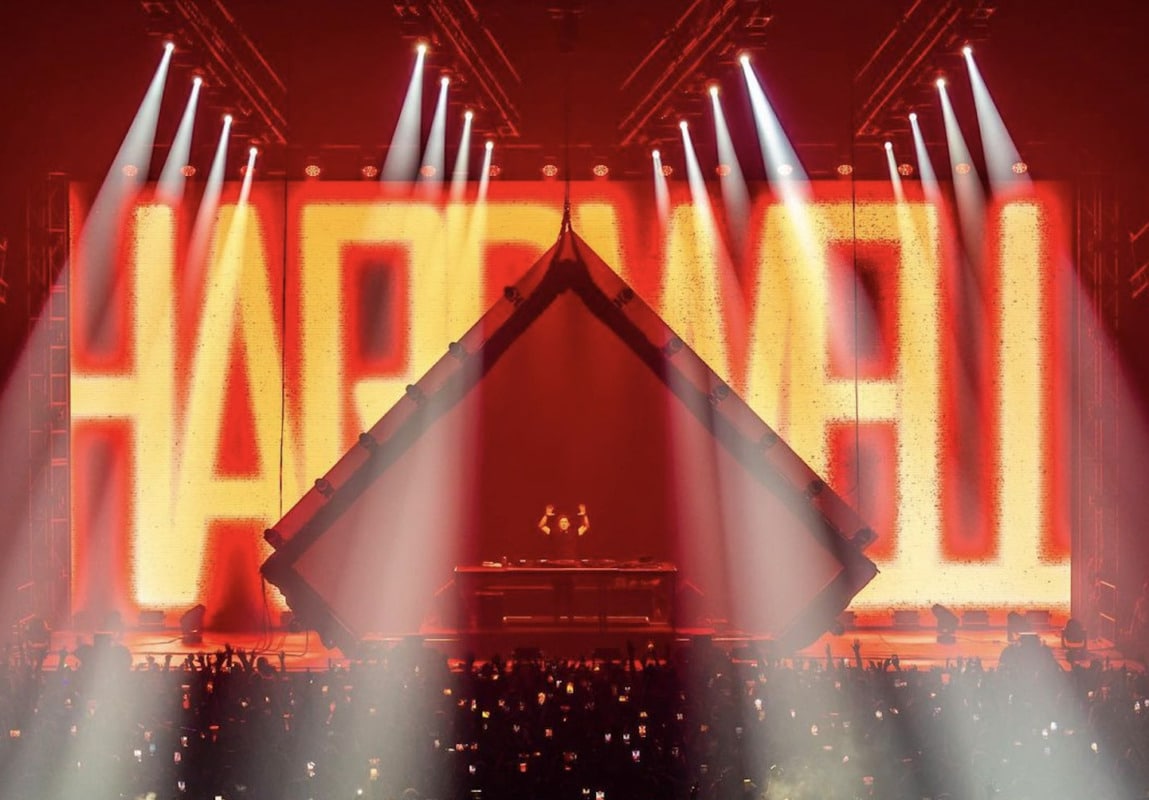 The last time he stepped foot in the state of New York, Hardwell was looking through a different lens. With a headlining evening at The Brooklyn Mirage in June 2018—less than a year after the venue had first opened its doors and long before it evolved into the production Goliath it’s known as today—Hardwell had yet to even publicize an announcement that would result in a four-year reprieve from a world that he’d unfailingly stood at the height of throughout the past decade-plus.

It would be reductive to summarize what’s happened since March 27 by simply stating that the Revealed Recordings boss is back. From the very second that the initial rumblings of “BROKEN MIRROR” coursed throughout the better half of Bayfront Park, a statement had been signed, sealed, and delivered that where he left off at the Ziggo Dome in October of 2018 wasn’t going to be where he picked back up in March of 2022. That night in downtown Miami ushered in a newborn identity that not only matured his classic approach, but also pierced a nascent category of modern dance music that ties together two genres. It’s a one-two punch of sounds that Hardwell plainly describes as “bigroom-techno.” And while he was busy rattling off the 14 productions that would go on to make up the tracklist for his United We Are follow-up, Hardwell simultaneously disclosed that he’d be embarking on an international touring circuit soon to follow his Ultra comeback. Our eyes frantically scanned through those 23 dates on his website—which included a pair of stops at Tomorrowland and a return to the White Isle—for one that read “New York.” Thankfully, we found it.

On September 17—almost six months removed from the day of his Ultra homecoming—Hardwell continued to add to an already historic resume that extends across three different decades, becoming the first dance act to headline Long Island’s newly constructed, multi-purpose UBS Arena, the home of the New York Islanders. But this wasn’t the first time that Hardwell and history found each other in the Big Apple; back in November 2014, Hardwell joined a short list of dance artists that have performed at Madison Square Garden (MSG).

For any attendee, performing artist or ticket holder, just a few steps inside UBS Arena lead to an instantaneous conclusion: like MSG, this is a venue that could also wear the title of “iconic” in the years to come. UBS Arena is irrefutably an architect’s dream, and with more than 1 billion dollars of backing, the idea that a dance music event could—and would—be successful at UBS Arena was all but guaranteed. Hardwell was a more-than-fitting name to make that happen.

After Laidback Luke jumped in as a last-second replacement to warm up the evening—filling in for the tour’s main opener, Tim Hox—Hardwell’s futuristic, diamond-shaped production rig appeared in full view for a two-hour onslaught that presents his Album of the Year candidate in an entirely new light. While we’d already gotten glimpses of what the Rebels Never Die tour had to offer following Ultra, both from fan recordings and the pair of hour-long Tomorrowland streams, it truly took witnessing the tour first-hand—and in a two-hour window—to completely grasp what Hardwell had envisioned.

Reintroducing his Ultra-preamble-turned-album opener—better known as “BROKEN MIRROR” and “INTO THE UNKNOWN”—Hardwell put forth what seems to be an anomaly in this day and age of album tours: he played each and every single album track. And as we’re all aware of by this point, the finish line to his new music campaign wasn’t remotely close to the Rebels Never Die title track. 11 yet-to-be-released Hardwell productions—including a slew of Rebels Never Die reworks for classics like “Retrograde” and “Bigroom Never Dies,” as well as unreleased collaborations with Olly James, Sub Zero Project, Will Sparks, and Maddix and Timmy Trumpet—filled up nearly a third of the 34-part tracklist. And while it’s not entirely clear which of these will be included, Hardwell exclusively confirmed to Dancing Astronaut that his album’s deluxe expansion will be shared in full on November 18.

As for the remaining two-thirds of the set, Hardwell’s Rebels Never Die tour was as well-rounded as physically possible. Seamlessly interweaving non-Hardwell classics—including “Leave The World Behind,” “Calling (Lose My Mind),” “Don’t You Worry Child,” “Titanium,” a rework of “Calabria,” “Sandstorm,” a forthcoming co-remix of “Satisfaction” with Maddix, and “Zombie”—with both his album and post-album outings, Hardwell’s Rebels Never Die set plays the ultimate balancing act between a rush of dance music nostalgia and his new-age charge of bigroom-techno. The 120-minute spectacle—in tandem with the spellbinding tour production and UBS Arena’s crisp sound system—enabled Hardwell to move forward with a picture-perfect opportunity for an audience to both audibly and visibly soak in what his comeback reign embodied.

Just moments before Hardwell took the stage to present the Rebels Never Die tour in its entirety to a New York crowd that hadn’t seen him standing behind the decks in more than four years, Dancing Astronaut reunited with Hardwell—following a 2018 sitdown at Ultra—to touch on everything from making history at UBS Arena to his creative approach to his sophomore album’s forthcoming deluxe version.

You’ve played some legendary shows in New York throughout the years, from Madison Square Garden in 2014 to Governors Island in 2017 to Brooklyn Mirage in 2018, just to name a few. Now, you’re the first dance music artist to headline UBS Arena. How’d that come together?

Hardwell: “[Laughs] Basically what you mentioned. We’ve done those venues before and this a brand new arena. We wanted to change things up, and I think an arena fits perfectly with the new sound as well. A lot of other artists have been doing Brooklyn Mirage and as an EDM artist, I wanted to do something different. I think it was the perfect location.”

You just wrapped up the rollout for Rebels Never Die, which is easily up there alongside United We Are as two of my all-time favorite albums. How would you compare your album creation process this time around?

Hardwell: “They were basically the opposite for me. Because with United We Are, that was basically made on the road while I was just constantly touring. And with Rebels Never Die, it’s a full solo album compared to United We Are [which has a lot of] collaborations on it. So with Rebels Never Die, I wanted to create the music that I would like to hear at a festival main stage. So music without any boundaries of certain genres or certain styles. I tried to develop my own sound even more. I flirted a little bit with the early trends like techno and obviously my own bigroom stuff. During this all, there were no deadlines and no ideas of an album. I just start creating music. And [Rebels Never Die was] was basically the first thing that came out of my mind.”

Going off that, did you feel some sort of relief once the pandemic hit, where there was less pressure to make a comeback in a sense?

Hardwell: “I’ve thought about it a lot, but I didn’t think it really affected me because I wasn’t there to be honest. Even if it wasn’t for COVID, it definitely [wouldn’t have been] earlier than [2022] for me as a comeback. I wanted to make the album exactly how I wanted it to be and it took a lot of time to create it.”

Outside of the collaborations that you’ve debuted during the Rebels Never Die tour, are there any producers or even vocalists who you’re interested in working with?

Hardwell: Well, I’m working on a couple of vocal tracks. It’s still hard to fit it in the new style. For me, it’s just experimenting and see how it goes. On the top of the [producer] list right now, yeah I’m definitely working on a collab with W&W. We’ve done so many collabs before but I think it would be really interesting to see the old bigroom sound evolving into the new let’s say Rebels Never Die sound. And yeah, basically a lot of my Dutch friends who I want to create a song with now. I definitely want to do another one with Armin [van Buuren] and I’ve been talking with Martin [Garrix] about doing a collab, which is really interesting.”

In terms of what’s next, you’ve previously confirmed that the deluxe edition of Rebels Never Die is on the way. Are you able to share any details about it?

Hardwell: Yeah, so It’ll be out on November 18 and you guys are the first to know. Basically all of the Rebels Never Die reworks are gonna be on there and even another solo track that I’ve done. I’m still looking into it like I have so many stuff laying around. As I mentioned, I had close to like 30 or 40 tracks for the Rebels Never Die album and only those 14 made the cuts. So I’m probably gonna finish a couple more and put them on the deluxe album as well.

In the six months since Ultra, the Rebels Never Die sets have obviously evolved since then. How have you gone about deciding what you want to play in terms of classics, reworks, new collaborations, and other music?

Hardwell: Some tracks in my set are like mashups. Especially tonight. Tonight is like a Hardwell concert set instead of the regular festival set. Especially with the new sound, two hours is so much better than just banging out as much as you can at Tomorrowland mainstage for like 60 minutes. That’s why I always try to come up with those mashups. And for tonight, I’m gonna play basically the full album, some new edits, and I think I’m gonna drop “Young Again” and “Echo” in a new version and “Retrograde.” It’s basically like some of my old tracks definitely fit the new style and some of them it’s like don’t touch them anymore. The original was great and then just don’t touch them and leave it for what it is. I always do a couple of mashups and bootlegs like the one I did for ABBA at Tomorrowland. I always try to do different stuff like even the “Nothing Else Matters” mashup [with “F*CKING SOCIETY”] I did at Ultra. I basically try to play them out for the full year and then the year after that, come up with some new ideas.

I actually saw a video from the Montreal show last night with a mashup of Kx5 and Hayla’s “Escape” and “Rebels Never Die,” which is crazy. My favorite album track and one of my favorite tracks from this year. Any chance we hear that tonight as well?

Hardwell: “Yeah, it kind of went as a mistake because I wasn’t sure if this vocal would fit on “Rebels Never Die.” Well, it fits! It fit perfectly and it’s not even in the same key [laughs].”

This interview has been edited for length and clarity.