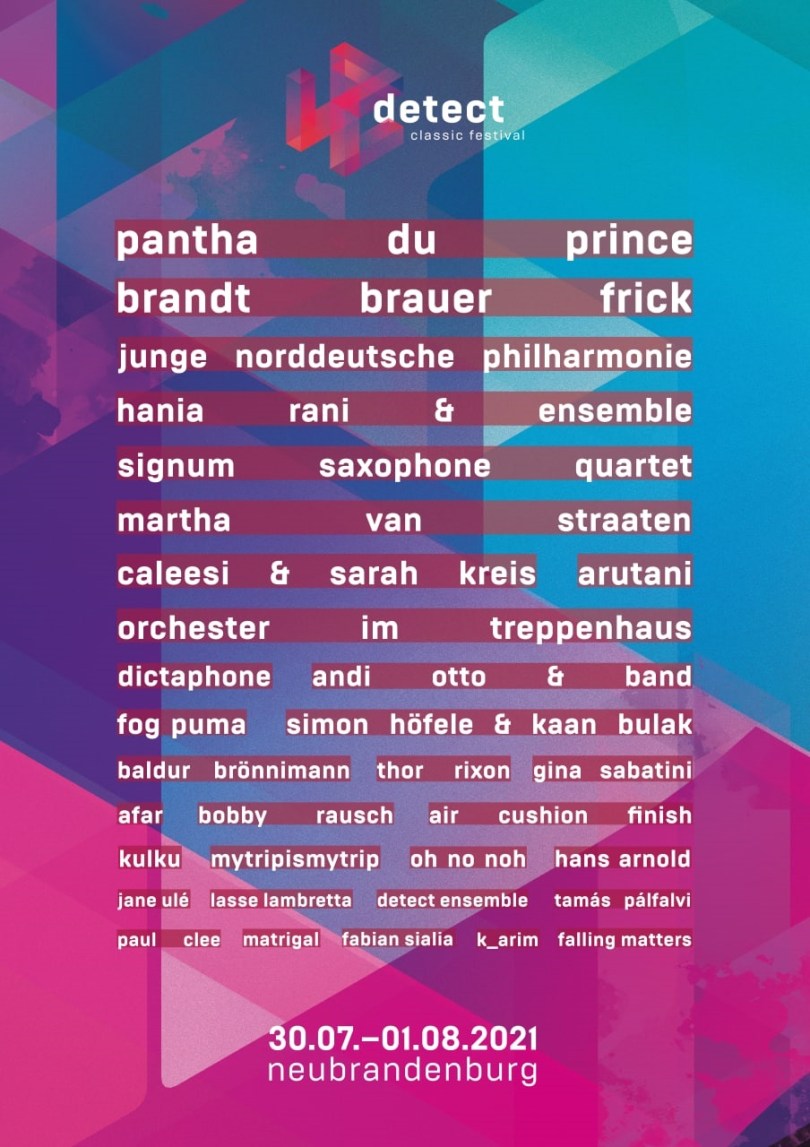 After a year’s hiatus due to the pandemic, Detect Festival announces its second edition in the spacious Trollenhagen airport near Neubrandenburg. Detect is a journey of discovery that aims to unite a wide-ranging and diverse audience of music lovers. It is not a classical music festival and does not want to be one either. Rather it features the classical music tradition within the setting and mood of an electronic music festival with an eclectic and contemporary lineup.

“That the Detect Festival can take place this year is the best news I got in a long time. We are very happy that we can finally present our incredible line-up of acts and experience concerts together again. It will undoubtedly be a very special weekend with so many unusual things going on! We hear DJ sets with trombones intermezzo, the new Detect Ensemble playing tracks by Roman Flügel, the young north German philharmonic orchestra stands for a new orchestral culture, Pantha du Prince shows us his sound world as well giving audiences the opportunity to discover many hidden musical gems.” – Paulina Sofie Kiss, festival dramaturgy & director of the Detect Ensemble.

Detect organizers – The young North German Philharmonic and the Mecklenburg-Western Pomerania Festival announce a stellar line-up of acts such as neoclassical stars Hania Rani and Brandt Brauer Frick and DJs and electronic music producers, including Martha van Straaten, Pantha du Prince, Thor Rixon and Caleesi & Sarah Kreis. Also performing at the festival are unmissable classical acts such as Baldur Brönniman as conductor and Tamás Pálfalvi as solo trumpeter at the concert of the young North German Philharmonic, Simon Höfele and Kaan Bulak with their very own symbiosis, the TRIKESTRA, consisting of musicians from the Young North German Philharmonic and the German Symphonie-Orchester Berlin and the STEGREIF.orchester.

In order to be able to implement the applicable hygiene measures in the festival, the Detect site is moving to the spacious Trollenhagen airport near Neubrandenburg. In the luggage: a circus tent, a brilliant line-up and bold ideas.