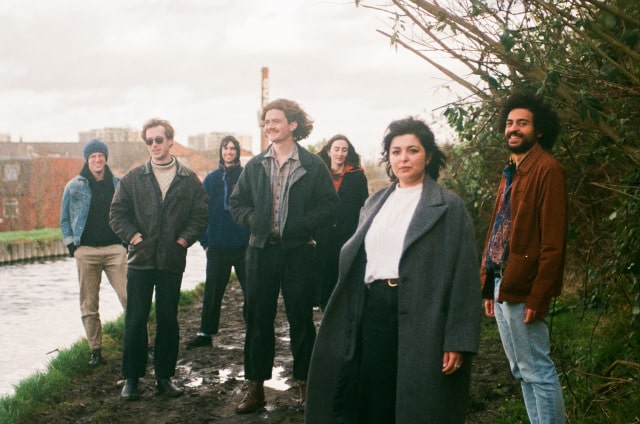 It’s hard to describe listening to For Breakfast’s new EP as a journey, it’s more of a pilgrimage through rocky terrain then rich grassy plains, offering both sweltering moments of beating sun on your back then torrential rain. Both spiritually overwhelming in its dramatic heights and intimate in its foggy introspection, ‘Trapped in the Big Room’ is a grand statement of intent by the London 7-piece.

‘Heavy Horse Museum’ opens with the instrumental intricacy you’d expect from a finely-tuned ‘big band’, horns and flute cut a heavenly path over drums and staggering bass lines – there’s a ferocity and rawness that juxtaposes the ethereal textures and spoken word vocal delivery. The influences aren’t immediately obvious but ooze into the tracklisting in a subtle manner, Portishead, Cocteau Twins and Mogwai to state the obvious (impeccable taste).

Second track ‘OK Roswell’ has a delicate, jazz-feel, post-rock approach, bringing the tempo right down and allowing the vocal of Maya Harrison to glide then attack the space, inevitably For Breakfast scale up and explode in the second half of the song to devastating effect. ‘Orfordness Lighthouse’ arrives next and represents the stand out single of the EP, it’s truly glorious in all its slow-burning trip hop splendour, Harrison melds subtle melodic flair and touching lyrical imagery – summoning the spirit of mother nature in a process of growth and healing. Unquestionable one of the best tracks released in 2022 so far.

The EP represents building tension and glorious pay-offs, instrumentally For Breakfast have the power to submerge you in past memories and pent-up emotion – pulling you out of self-reflection just before the going gets too tough. ‘Nervous Boundaries’ ends the EP, showing another string to the band’s bow – high tempo and boundless. The track builds into a theatrical climax, an all guns blazing assault complete with a space-age guitars, spiralling bass groove and floral saxophone notes. ‘Trapped in the Big Room’ is unshakable in its diversity and energy, a pilgrimage of sound and genre boundaries, For Breakfast soundtrack the circle of life – a parallel universe where feeling and emotion are paramount.

Join the band tonight (June 1st) at The Waiting Room, London for their headline show.

Written by HARD OF HEARING MUSIC