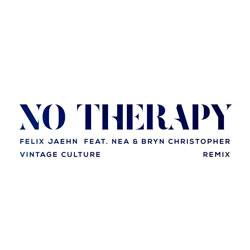 Vintage Culture is a music producer and DJ hailing from Brazil. He received international recognition with his single “Wild Kidz” released by Spinnin Records in 2016. The piece entered the “Global Viral” Spotify and gained support from Oliver Heldens, EDX, and Sam Feldt. In 2015, the producer took number 2 on the list of the best Brazilian DJs House Mag. In 2018, he took number 19 in DJ Mag’s Top 100 DJs list.

Let’s listen to Vintage Culture’s remix of the track “No Therapy” by Felix Jaehn, featuring Nea and Bryn Christopher. This one is an infectious rendition packed with a booming beat to bounce to. Go ahead and give it a listen below!