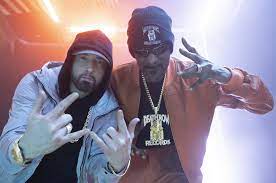 Eminem and Snoop Dogg are going from the D to the LBC to the VMAs. The hip-hop icons will take the stage at Sunday’s MTV Video Music Awards for an out-of-this-world performance of their latest collaboration “From the D 2 The LBC.”

MTV partnered with Yuga Labs for the metaverse-inspired performance, which is based on Otherside, a virtual gaming world that is being developed as an online multiplayer game. Yuga Labs is also responsible for launching the Bored Ape Yacht Club NFT collection, featured in the music video for “From the D 2 The LBC.”

This will mark Em’s first performance at the VMAs since “Not Afraid” and “Love the Way You Lie” in 2010. Snoop most recently teamed up with Diddy in 2005 to perform “Juicy” and “Warning.”

“From the D 2 The LBC,” Eminem and Snoop’s first collaboration in over 20 years, is nominated for Best Hip-Hop at the VMAs. // Continue to the full article