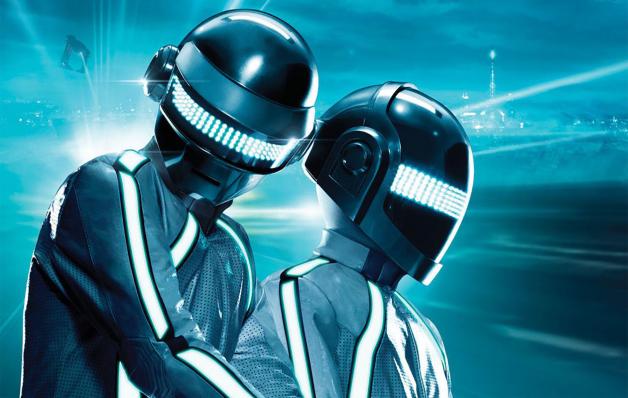 It’s a key point in their catalogue…

A technological future, a futuristic sound, and a soundtrack re-pressed in a traditional format. Twelve years after TRON: Legacy, we revisit what is arguably Daft Punk’s most overlooked project.

And why is it that this project – one that is, at its core, a brilliant album – is overlooked, you ask? Because soundtracks are a side of the music industry that many simply dismiss. They’re typically compilations, a playlist of songs that marry up to the film but have no real part in the narrative. Tracks are copied and pasted into a scene, rarely custom built to fit the mood.

Franchises like James Bond have utilised the power of custom songs, of marrying music to film. Baby Driver successfully utilised the playlist flaw to its advantage, acknowledging that these tracks were not its own. Further into the past, The Who’s Quadrophenia is a tale like no other, built around the preceding concept album. But these are simply examples of a form of success and admiration that the TRON: Legacy soundtrack never quite reached.

The publicity around the soundtracks that tasted success is arguably one of the reasons for their success, almost irrespective of the talent such soundtracks demonstrate. The productions were cool and notable, with palpable excitement created by the media. Songs were highly anticipated, longed for and praised, with awards handed out on mass. They weren’t backed by what is most commonly seen as a children’s production company.

Perhaps that’s where Daft Punk’s solitary soundtrack fell short. Because the music itself is undeniably brilliant, but it’s in an unusual position, where it just doesn’t feel like an opus you can admit to liking. Even in saying the title, you’re admitting to liking a Disney soundtrack. Not a progressive electronic expression of the famed French duo, but a soundtrack to a sequel. And all music fans know the risk of second albums… try the risk of second films and come and talk to us.

But in actuality, the power their music has within the film is breath-taking. As shots bleed timelessly into one another, their music helps to weave together a narrative rather than taking a backseat and watching the world go by. Layering film monologues with a distinct Daft Punk sound, they take you on a journey, be it when watching the film, or experiencing just the music. Sitting at near an hour and a half, their music, spanning 31 tracks in total, accompanies Sam Flynn’s on three quarters of his journey.

It’s an impressive feat and a fine example of just how important music is within artforms and mediums.

Even in their cameo, they avoid the clichés that we’re so often forced to endure. A slight nod to the camera, a break of the fourth wall as the star says, “yes, I’m here, how cool am I?” We’ve suffered Ed Sheeran in Yesterday, or worse, Ed Sheeran in Game of Thrones, but in rewatching TRON: Legacy, with the knowledge of what’s to come, you needn’t hold your breath. Because the duo fit perfectly into the grid. No alterations needed. In fact, the only bit that warrants a slight grimace comes from Michael Sheen’s Castor acknowledging them, where they would have otherwise simply blended into the background.

But blending in isn’t all it’s cracked up to be, as is so evident from the common dismissal of an album that deserves an applause. So, to see it honoured, re-pressed on vinyl, is a moment I can imagine many fans of the work did not expect – Clash included. It solidifies not only the importance of the soundtrack within Daft Punk’s catalogue, but the importance of soundtracks as a whole. And to do it in a reviving format feels all the more notable, highlighting the obscure revival of a once-dying format in a technological world.

Whilst TRON looked toward the future of a digital age, TRON: Legacy saw the real beauty of the nature that exists outside of the grid. The natural power of that which we take for granted. Summarised in the beautiful closing sequence, upon where Quorra experiences her first glimpse of a sunset, we are reminded of how beautiful the world beyond the two-hour-long film is.

Because whilst we momentarily escape into a different world, the one so vital to experience is the one we often leave behind. – Perhaps it’s a far stretch to compare a sunset to vinyl, but where we forgot the beauty of nature, we too forgot the beauty of tangible music, the experience of picking it up, holding it in your hands, and helping the needle find the groove.

We forgot the beauty of what came before our modern world. – And sometimes, we need a reminder.

TRON: Legacy is out now on vinyl.