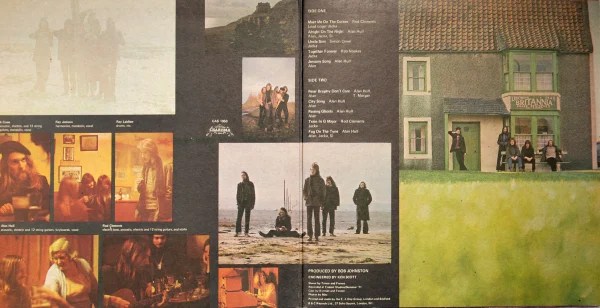 Martin Johnson is the latest of our writers to argue for an unlikely Americana candidate. He’s chosen a band that will always be associated with the North-East; can he convince on a connection with the wild West?

The songs relate to England’s North East and the drink of choice was Newkie Brown, not bourbon.

Picking up Rick Bayles’ challenge of arguing for an album, or band, that may not be automatically thought of as americana and arguing that they are, has caused me to look deep into my past and go back over fifty 50 years to a band and an album that had a formative influence on my musical journey to americana. Today you can easily access virtually all recorded music from your mobile phone, and while this has many advantages, it can devalue the actual music which is sometimes reduced to simple product in this digital world. However, back in the day, 1971 to be precise, things were very different. Albums sold for typically £2, the equivalent of about £30 today, which for an impoverished six former with a  beer and cigarette habit to fund out of his part-time work, was a considerable investment and not to be taken lightly. Aligned to the relatively high cost of recorded music was the lack of any real information about the real history of what in hindsight was still a relatively new form of music. The first test of any purchase was whether the musicians had the right look and length of hair, and then what did the music press, Sounds was our bible of choice,  have to say about a particular release, and finally, you may get to hear some of the tracks on John Peel’s radio show or the pre-Whispering Bob Whistle Test. Most record collections then were shared amongst your group of friends, so potential purchases were discussed in advance before finally going to the local toy shop or white goods seller for your actual platter. This long-winded introduction is an attempt to illustrate just how significant an album purchase was 50 years ago, and therefore full value was always got from any album, whether you actually liked the music or not. That meant gleaning every last bit of information from the sleeve notes and reading intently any interviews undertaken by band members.

The other thing you need to know is that most new record releases that you purchased, in some shape or form, also expanded your musical experience. Most of the sub-genres of rock music that everyone is familiar with now had yet to be defined, if it was played by longhairs it was rock music and therefore worth a listen. While we all supported album music and looked down on the singles market, the singles chart sometimes brought a new artist to your attention. While I had heard of Lindisfarne the band and knew their mandolin player had been featured on Rod The Mod’s ‘Every Picture Tells A Story” album and number one single ‘Maggie May’, I wasn’t familiar with their music. Like quite a few people it was the ‘Meet Me On The Corner’ single that piqued my interest, I still wonder whether the BBC had actually listened to the lyrics, and the high level of press coverage they were beginning to receive that encouraged me to part with my hard-earned, and I bought ‘Fog On The Tyne’ in February 1972. Coming from the North East there was a certain amount of pride associated with a local band beginning to make good, and the fact that Bob Dylan’s producer Bob Johnstone, who I subsequently found out also twiddled the knobs for Johnny Cash, Simon and Garfunkel, and Leonard Cohen, produced ‘Fog On The Tyne’ only added to the sense of occasion.

Though ‘Fog On The Tyne’ is often included in various classic folk rock album lists, at the time it was viewed more as acoustic music with references to Crosby, Stills & Nash and the Band, and Lindisfarne never hid their blues band antecedents as Brethren in interviews. I still long for the excitement and anticipation of getting home with a new LP that I experienced in 1972 due to the cost and relative infrequency of purchasing an LP. I wasn’t disappointed. The first track was Rod Clemets’  ‘Meet Me On The Corner’ with Ray Jackson’s vocal which was familiar due to its single success. Any lingering nerves were dispelled by the Friday night drinking song ‘Alright On The Night’ which still had a nice rough around the edges sound despite Bob Johnstone’s production. Acoustic guitars, mandolin, and Rod Clements’ walking bassline with Alan Hull and Ray Jackson’s vocals make this a classic Lindisfarne track. By the third track, Simon Cowe’s anti-war ‘Uncle Sam’ fiddle was heavily featured and my feet were tapping. The album also contained more reflective Alan Hull songs that helped fuel the New Dylan tag for a while, ‘January Man’, ‘Peter Brophy Don’t Care’, ‘City Song’, and ‘Passing Ghosts’. Throw in a nice song by the mysterious, at the time, Rab Noakes, ‘Together Forever’ and an acoustic blues by Rod Clements, ‘Train In G Major’ and I felt I was experiencing a new world of music I had only previously heard about but not actually heard. The closing title track, though now suffering from over-familiarity, was a revelation as a sing-along drinking song, perfect for a group of 16-year-old friends having four or six pints of Newkie Brown or Newcastle Exhibition on Friday and Saturday nights.

Lindisfarne dominated the music of 1972, so much so that their debut album 1970’s ‘Nicely Out Of Tune’ belatedly entered the album charts with a track, ‘Lady Eleanor’, outperforming ‘Meet Me On The Corner’ on the singles chart. There is a debate about which is the better of the two albums, and while ‘Nicely Out Of Tune’ is looser and rougher than ‘Fog On The Tyne’, the songs are a match. So much so that Elvis Costello has said ‘Winter Song’ is one of the greatest ever songs. In 1972 Lindisfarne pulled off the unique trick of appealing to the greatcoat and denim jacket brigade, as well as the mams and dads, and even grandads were heard whistle Lindisfarne songs on the bus. I saw Lindisfarne in 1972 at The Redcar Jazz Club, and it was a great night, topped by my dancing on the tables until beer and gravity caused me to fall off. Unfortunately, 1972 was Lindisfarne’s peak. Their late 1972 album ‘Dingly Dell’, while performing well did not match their previous album sales, the band were suffering internal tensions for various reasons, and the once supportive music press turned on them with mediocre reviews. The reviews were unfair, but the band’s insistence that they push the serious nature of their songs and their demand for a simple brown cover with only the band’s name and album title, which were also printed in brown, was a marketing misstep as was the absence of a typical Lindisfarne single which lost them the support of a wider audience.

Though I have always maintained a passing interest in Lindisfarne, including Alan Hull and Rod Clements’ solo careers, over the years, 1972 was my peak year of fandom. In 1972, while I had heard of The Byrds’ ‘Sweetheart Of The Rodeo’ I had not actually heard it, and I only had a passing familiarity with The Band’s full catalogue, and the fact that Lindisfarne’s music was being compared to these cornerstones of americana made me determined to seek this music out. Additionally, it was Lindisfarne that introduced me to the joy of the mandolin which lead me to bluegrass and new acoustic music. The songwriting of Lindisfarne was also a revelation in that it was about real people and real places, not an idealised view of the American Deep South and Mississippi Delta, or an adolescent take on blues lyrics, and there wasn’t a hobbit to be seen anywhere, which opened my ears to the new songwriters coming out of Austin, Texas, in the early ‘70s. Thankfully, by 1973 I was a student in London with access to London’s record shops particularly Honest Jon’s, which gave me access to this new music and knowledgeable staff to chat to, particularly Phil from Honest Jon’s.

Lindisfarne never had a lot of twang, and the pedal steel never featured in their music, but the multiple acoustic guitars and mandolin played with a rock intensity, and the solid rhythm of Rod Clements’ innovative basslines were an echo of bluegrass, and to an extent string band music. However, it was the quality of the songs that drew their inspiration from everyday life and real characters and experiences that makes them a fit for americana with its sense of authenticity. Also, just for the record, while Alan Hull was the major songwriter in Lindisfarne, in 1972 they were a true band with every member adding to the whole. The English North East may not have been the American South, but the everyday struggles of people involved in heavy industry and the effects of economic decline were in some way a mirror experience of the deprivation suffered in the American South, with the obvious exception of the echoes of slavery.

As my knowledge of americana type acts increased over the years I thought about Lindisfarne less and less, and while I may have still read the odd article about their ongoing exploits, I played their music even less. However, the recent BBC4 documentary, ‘Lindisfarne’s Geordie Genius: The Alan Hull Story’, and the challenge of writing this article, have not only reminded me of their influence on my own taste in music but also what a great listen ‘Fog On The Tyne’ still is. The songs are about real places and people and are as vibrant as anything that has come out of Austin or Nashville, you hear the influence of ‘Sweetheart of The Rodeo’ and The Band despite the influence of the North East of England, and the songs were part of the public consciousness for a time, and still are in parts of the North East, even if the Grandads still whistling their songs were once part of the greatcoat and denim jacket brigade. While Dylan’s producer Bob Johnson may have brought a more polished sound to the recording than on their debut, the looseness and roughness around the edges, which is a key part of americana in my book, is still there for all to hear. Finally, if such an English songwriter and performer as Richard Thompson is accepted as americana by Americans themselves, then there can be no argument about dropping the folk rock categorisation from Lindisfarne and replacing it with americana, or at the very least adding it to their catalogue description.