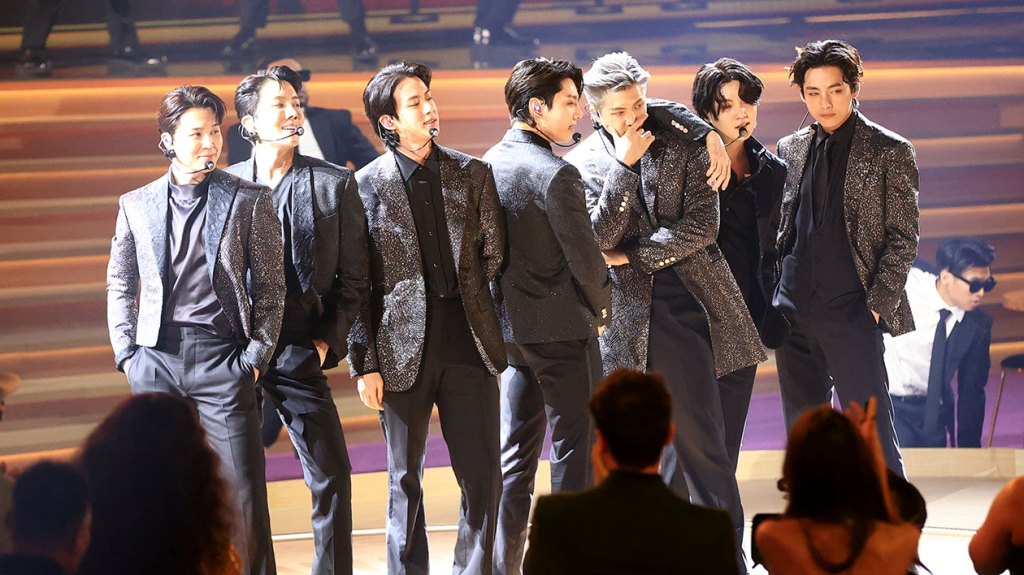 The biggest tour in April wasn’t even really a tour. Bad Bunny led the February and March charts with 12 and 20 shows, respectively, and Trans-Siberian Orchestra were in two places at once throughout December, performing 71 shows as the month’s top earner. But in April 2022, BTS sets another in a long string of Boxscore records by playing the fewest shows – four, to be exact — for a No. 1 tour since the monthly charts launched in 2019.

The South Korean superheroes hit Allegiant Stadium in Las Vegas for performances on April 8, 9, 15 and 16, dominating the entire month in just two weekends. The four shows collectively earned $35.9 million and sold nearly 200,000 tickets according to figures reported to Billboard Boxscore, claiming the No. 1 position on Top Tours and Top Boxscores.

That massive haul makes the April gross the biggest of BTS’ career, immediately replacing its’ SoFi Stadium (Inglewood, Calif.) shows from last year at the top of the list. As previously reported, those dates earned $33.3 million and, excluding multi-artist festival events, and became one of the 10 highest grossing engagements in Billboard Boxscore’s history.

And just as the L.A.-area shows became the biggest Boxscore ever in California, April’s Allegiant Stadium dates claim the all-time record for Las Vegas and the state of Nevada. It’s also the second biggest North American Boxscore ever, only behind Bruce Springsteen’s $38.7 million sweep in 2003 at Giants Stadium in East Rutherford, N.J. All in all, it’s the fifth biggest Boxscore of all time.

BTS’ recent stop in Las Vegas performed similarly, but slightly better than the SoFi shows. On average, the Vegas dates earned $8.99 million per night, compared to $8.33 million in Los Angeles. Seating was scaled smaller at Allegiant, averaging 49,924 fans each night, versus 53,438 in L.A., but the average ticket bumped from $155.87 to $180, forcing Vegas’ per-night gross closer to $9 million.

The Las Vegas run is the 10th Boxscore with reported earnings of more than $30 million. BTS, Take That and U2 each have done it twice, while Springsteen, Roger Waters, the Spice Girls and the Grateful Dead round out the $30 million club. That makes BTS the only artist not from the U.S. or the U.K. to gross as much at a single venue.

These shows were BTS’ first visit to Las Vegas, having only previously played the greater New York area, the greater Los Angeles area and Chicago, among U.S. markets. The isolated group of performances could be a sign that the Korean superstars are getting closer to a nationwide tour, just as labelmate SEVENTEEN prepares a 12-city North American run later this summer.

BTS’ April victory makes the group the seventh act to rule Top Tours chart more than once, following Elton John (four times), The Rolling Stones (three), Bad Bunny, P!nk, Post Malone and Trans-Siberian Orchestra (two apiece). After doing the math and considering the charts’ COVID-induced hiatus, there have only been 22 editions of the Top Tours ranking, meaning its rarer to rule list once than multiple times. Only five artists – Backstreet Boys, Los Bukis, Ed Sheeran, Spice Girls and Tool – have done it once. BTS previously topped the list in May 2019 with a $51.7 million gross from eight stadium shows in North and South America.

BTS’ victory over the April charts was swift but narrow. Once again, Elton John is No. 2. That makes four consecutive months for John in the runner-up position, having sat behind Tool in January and Bad Bunny in February and March. His 14 shows in April grossed $35.1 million and sold 195,000 tickets, just 3% off from the top spot.

Based on pure attendance, BTS and John rank third and fourth for the month, behind Coldplay and Ed Sheeran, each of whom sold more than 200,000 tickets. They rank at Nos. 4 and 6, respectively, on the gross-based chart from their international stadium runs. For Coldplay, it was four shows at Mexico City’s Foro Sol, grossing $19.5 million from 260,000 tickets sold.

For Sheeran, it was two shows in Dublin and two in Cork, Ireland, plus two warm-up club shows earlier in the month, totaling $18.4 million and 211,000 tickets. The stadium dates were the official kick-off to his Mathematics Tour, the follow-up to the Divide Tour (2017-19) which was named the highest-grossing and most-attended tour of all time.

Not only do BTS’ four Vegas shows rule over Top Tours and Top Boxscores, the $35.9 million take makes Allegiant Stadium the highest grossing venue of the month and brings HYBE to No. 4 on the Top Promoters chart, behind Live Nation, AEG Presents and OCESA.

A Tomorrowland Fantasy Fiction Trilogy Is Under Development

Florian Kruse LIVE on the Virtual Sessions presented by The DJ ......