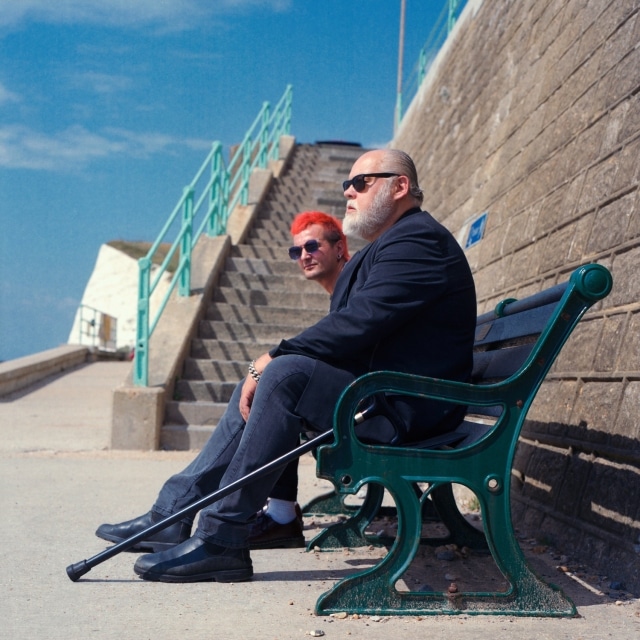 Anzahlung initially formed as a side project to legendary band The Cravats, the duo made up of The Shend and Joe 91 today released their second album What You Think is All You’ve Got, and are on the bill for ex-Kraftwerk member Wolfgang Flur’s gig at the Concorde in October. We caught up with them on a sunny day in Saltdean to quiz them about their Brighton

What’s the best thing about Brighton?
Joe : Brighton is the only place I’ve lived apart from Welwyn Garden City, which is a big C and small c conservative commuter town. Brighton is the complete antithesis to Welwyn; it’s still the only place in the world (that I’ve visited, at least) where I’d feel safe holding my boyfriend’s hand. It also has the most pubs per square mile than any other place in the UK, apparently. Convenient.
The Shend : Anything goes

What’s the best venue?
Joe : We’re not short of decent venues in Brighton but the bulk of my favourite gigs have been at Green Door Store. Me and The Shend have played some exceptionally fun gigs there with our other band The Cravats.
The Shend : Concorde 2

What’s the best rehearsal space / studio?
Joe : Brighton Electric. Staff are super lovely, the facilities are second-to-none and they serve decent beer. Under The Bridge deserves a mention too, Anzahlung have rehearsed there a couple of times, it’s friendly and affordable and they do lots of great community work too.
The Shend : Brighton Electric

What’s the best club?
Joe : I don’t frequent a particular club that often but there are plenty of great club nights in Brighton right now – Mi Piaci, Farmageddon, Traumfrau, Polyglam to name a few.
The Shend : Stay Sick

What’s the best record shop?
Joe : Resident is my go-to for records and has been since I moved here in 2013. Lovely place and glad to see that it’s still thriving.
The Shend : Across The Tracks

Where’s the best places to eat?
Joe : Too many to choose from! Recent highlights have been Adelfia, Khambis, Planet India and Alushi.
The Shend : Grubbs Burgers

What’s the best pub?
Joe : Prince Albert. Usually frequented by an assortment of types but never any hassle, decent venue upstairs and a giant Dot Cotton mural out the back.
The Shend : Prince Albert

Who’s your favourite Brighton celebrity?
Joe : I feel obliged to say The Shend… but I’m going with Ben Wheatley. Sightseers is one of my favourite films.
The Shend : David Thomas

When was the last time you had any Brighton Rock?
Joe : I don’t eat rock, my teeth are knackered enough as it is! I do have a Throbbing Gristle stick of rock under my bed, purchased at their 2006 reunion gig in London. I wonder what state it’s in now.
The Shend : Never