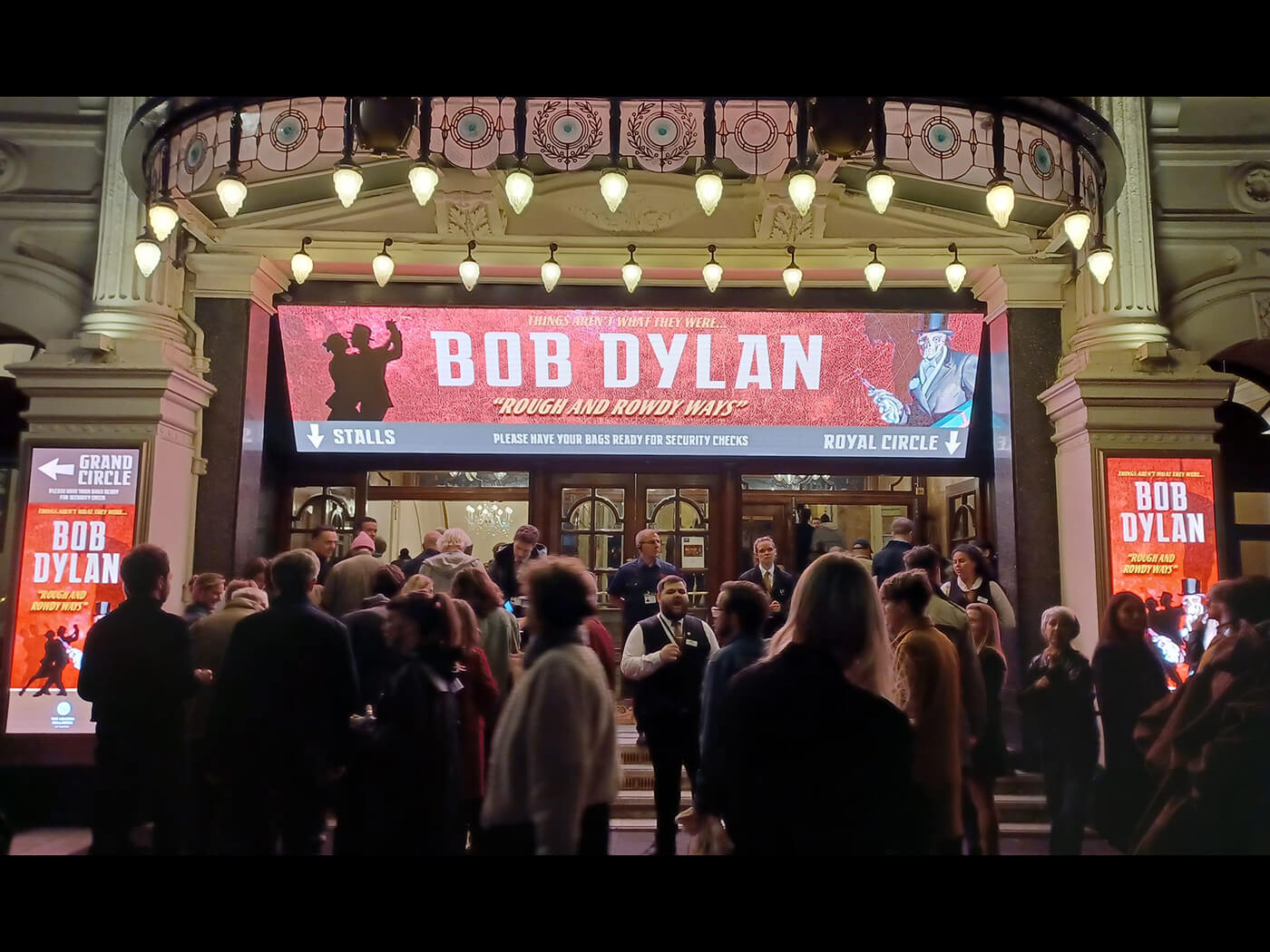 There is a large white truck parked at the end of Argyll Street bearing the inscription, ‘Rock ‘N Roll Trucking’. To the queue outside the Palladium, it provides the first of many talking points tonight – later, these will be expanded to include the absence of Bob Britt, the shout out to Joe Strummer, the post-show patience of Jimmy Page as fans queue up for a handshake. “I saw you in 1975…” And then there’s the show itself, of course: almost two hours of audacious new arrangements and unexpected dramatic flourishes, driven by Dylan’s remarkable piano playing.

ORDER NOW: Bob Dylan is on the cover of the latest issue of Uncut

At around 7:50, the theatre tests the safety curtain, lowering it to reveal a sketch of the Palladium – “as it was in the days of Hengler’s Circus”, the venue’s earliest incarnation, and the kind of arcana you could imagine might amuse Dylan. At 7:59, the lights go down. The band appear on stage with Dylan himself seeming to appear as if by magic, or perhaps you might fancifully imagine him popping up through a trapdoor. After the previous night’s comment about rattling jewellery, you might wonder whether Dylan would offer up a trenchant comment on the day’s events a mile down the road in Whitehall. But aside from “Why, thank you!” after “Watching The River Flow”, “There are a lot of baby lovers here” after “I’ll Be Your Baby Tonight” and his request that Lucinda Tait, Strummer’s widow, take a bow, he remains quiet between songs, choosing instead to jig out from behind the piano on three occasions to acknowledge the audience’s appreciation. A lone microphone stands centre stage, presumably on the off-chance Dylan fancies a turn in the spotlight. Rumours that Dylan’s guitar tech was spotted buying an acoustic guitar on Denmark Street sadly seemed to have come to naught.

It has been a busy year for Dylan, of course: the opening of the Dylan Center in Tulsa in May, the impending publication of his new book, The Philosophy Of Modern Song, plus some art shows in France and Florida. There has also been the 25th anniversary of Time Out Of Mind – a milestone so far unmarked, but one which tangentially hangs over Dylan’s current creative phase. As with Time Out Of Mind, Rough And Rowdy Ways was a major new body of work after many years of absence. Just as Good As I Been To You and World Gone Wrong enabled Dylan time to gather himself creatively before returning with Time Out Of Mind, so the three albums of standards he released between 2015 and 2017 allowed him to explore a softer, more fluid sound to best serve his maturing voice. The fruits of those labours are evident on Rough And Rowdy Ways – and tonight, as Dylan further tweaks and refines and finds fresh approaches for these recent additions to his canon.

But while the standards albums strategically avoided the piano in favour of guitar, bass, brushed snare drum and the occasional weep of steel guitar, tonight it is ascendant. The back of Dylan’s upright piano faces the audience, slightly to stage left, with the other musicians in loose orbit around it. At stage right, Charlie Drayton’s drum kit is turned to face the piano, next to him Tony Garnier on bass keeps a watchful eye on Dylan while – and this is more to do with where I’m sitting than anything else – it looks as if Doug Lancio is playing guitar directly behind Dylan, almost looking over his shoulder. Over on stage left, Donnie Herron and his stash of steel guitar, fiddle and electric mandolin faces in towards Dylan. The stage is lit by the same shade of ochre used on the tour artwork which bathes the band – well-tailored men with an enigmatic professionalism – in a kind of Lynchian glow.

Dylan’s playing itself a thing on its own. Here he is, warm and expressive on “When I Paint My Masterpiece”, staccato chord bursts on “Key West (Philosopher’s Song)” or playing light, airy motifs on a magisterial “To Be Alone With You”. Most striking, perhaps, is “I’ll Be Your Baby Tonight” where he moves from rolling barrelhouse fills to disruptive, free jazz chords and back.

Among the band, Bob Britt is absent – it seems he’s flown back to the States for a prior engagement but is apparently due back for Sunday’s Palladium show. Lancio and Herron absorb his guitar parts between them, by necessity moving the arrangements further on from their studio equivalents. It’s hard to pick out any one player – they’re all superb, as you’d expect. But Charlie Drayton’s feline brushwork on “To Be Alone With You”, Lancio’s solos on the slow-burning blues of “Crossing The Rubicon” and Donnie Herron’s sympathetic pedal steel on “Mother Of Muses” are all standouts. Tony Garnier – the veteran here – seems quite high in the mix tonight, which foregrounds his discrete serving of the songs’ many changeable moods.

Talking of the songs, for the current issue of Uncut, I revisited a review I wrote of a 2013 Dylan show at the Albert Hall, after Tempest came out. After the spontaneous setlists of the Never Ending Tour, I think this was the first time in Dylan’s recent history that he built his set around a then-current album. This continued focus on what’s immediately in front of him reinforces the significance of this material: in 2013, he played seven of Tempest’s 10 songs while on this tour he’s playing nine of Rough And Rowdy Ways’ 10 songs. The setlists for this tour remain fixed, but there’s a sense that the songs are, even to infinitesimal degrees, shifting with each performance.

Highlights? A Mariachi “Black Rider” and a mesmerising “Key West (Philosopher’s Song)”, filled with noirish dramatic ebbs and flows. It’s tempting to read plenty into the lyrics, but when confronted with lines like “I’m not what I was, things aren’t what they were” or “The flowers are dyin’ like all things do” you can’t help but feel a certain reckoning, none more explicit on his tête-à-tête with Death on “Black Rider”, one of the most impactful songs on the album and shows.

He leaves us, then, with a roof-raising harmonica solo on “Every Grain Of Sand“, exiting the stage shortly before 10pm. Maybe he’s gone back to the Rock ‘N Roll Trucking bus…

Bob Dylan and his band played: