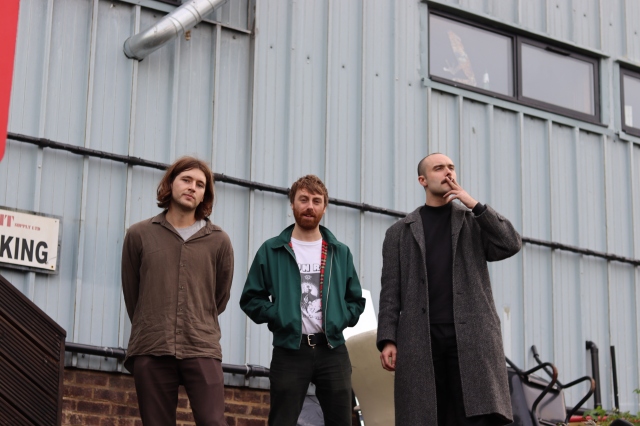 Bo Gritz have announced their return to the music game to the tune of new single, ‘Observes and Selects’ – an “all-rhythm” industrial statement of intent to mark the end of a five-year hiatus. The London three-piece cite Gilla Band and Snapped Ankles as reference points, but ‘Observes and Selects’ has a slick precision that distinguishes Bo Gritz’ own distinct voice amongst the chorus of grunge industrial post-whatever-it-is artists.

Guitarist/talker Finn Holland describes the single as “depicting a place confusing and claustrophobic.” The lyrics, he says, were written using a Burroughs-style cut and paste approach, splicing together words and phrases from gossip mags, murder reports and white goods manuals. Which is pretty cool, I guess.

Max Goulding’s drums are the real star of the show though. Sat firmly in the driver’s seat, they are the unrelenting pacemaker that keeps this track pumping even when the instrumental disintegrates into a gritty, digital abyss. They lock in beautifully with Benjamin Salt’s crunchy big-boy bass riff that provides the sleazy groove to ‘Oberserves and Selects’. The production on the drums, too, is sublime (that snare pop omg), but would one expect anything less from black midi’s live sound engineer (I wouldn’t).

Bo Gritz are the same vicious, snarling, punk animal they were of yester-year, but have re-emerged with some serious upgrades. Hopefully this more mature, slicker single is just a taste of what’s to come.

Written by HARD OF HEARING MUSIC