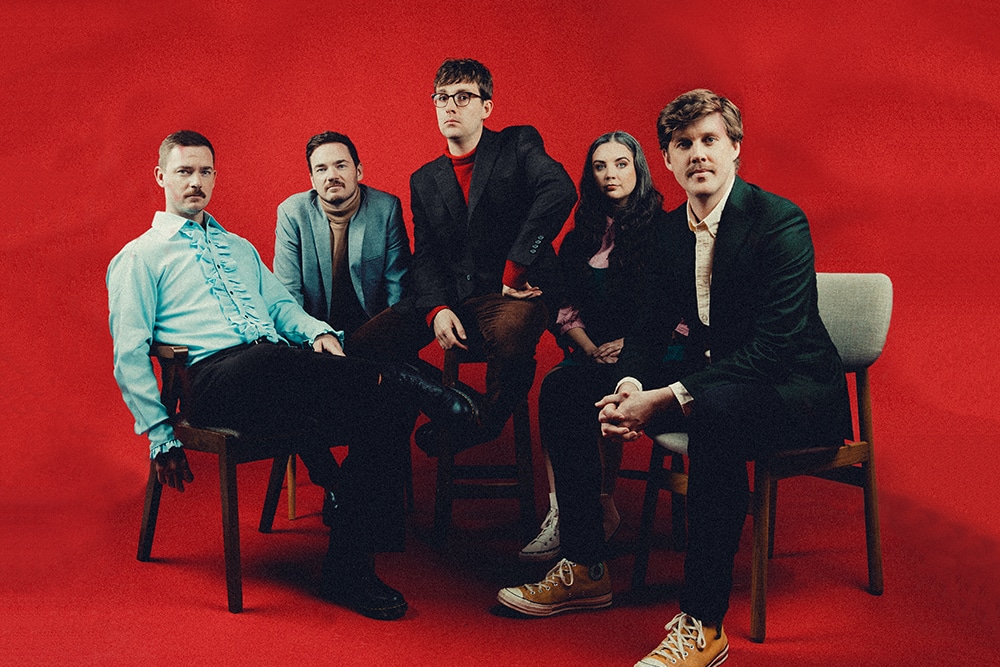 “I’m not sure what I’m more excited about. Push come to shove, maybe I’d have to say the tour because we haven’t been able to do something like that for so long,” Ball Park Music frontman Sam Cromack says, when asked whether the band’s first national tour in four years is more or less exciting than the release of their latest record.

It’s not an easy question to answer. Chatting about the album Weirder & Weirder over Zoom, it’s clear Cromack is incredibly excited for people to hear it. But he admits that there’s also a lot of anticipation for the tour after COVID wrecked any chances of playing to audiences around the country during the band’s latest album cycle.

They ended up playing a Brisbane residency after the release of their self-titled sixth studio album, but they’ll now play shows to crowds who, for the most part, haven’t heard that album live either. “We haven’t been able to do something like that for so long, just the thought of really getting out on the road and being able to do our own headline shows,” he says with a crack of a smile.

Touring is clearly something that Cromack and the band have obviously missed, even though he makes a point to say how thankful he is that they were able to play shows at all over the last two years. “COVID restrictions were still in place [during the Brisbane residency], and it was funny looking out at a room with a severely reduced capacity. Everyone’s stuck at their tables under threat of being booted out by security. So yeah, you wouldn’t just want to do headline shows in your own city for the rest of your life.”

During a chat that’s ostensibly about their new album, their self-titled 2020 record comes up frequently. It feels like that record never really came full circle on its cycle, without a national tour, before focus turned to the next thing. Cromack just about admits as much, acknowledging that for Ball Park Music, hearing their songs in different live settings is an important puzzle piece.

“I think the pandemic taught us that performing your music that you’ve written, is sort of like the final piece of the puzzle,” he says, thoughtfully. “You have a great time creating it, you work hard to record it, finish it, you release it online, sure you can get good feedback from people, but the most meaningful feedback is definitely that feedback that you feel like you can almost taste it when you’re in the room, like really feeding off the energy of the audience.”

It’s a cliche to say that every time a band tours off the back of a new album, choosing the setlist gets harder. But it’s never been truer for Ball Park Music than right now. Cromack reveals that putting together the setlist for this record created some genuine points of tension among band members. “We’re a pretty peaceful democratic group but you, but that’s certainly caused a lot of arguing,” he chuckles, before turning serious. “People are really passionate about what they want to play, and you can’t do everything. So it’s actually quite sad sometimes, accepting that songs that you might have liked and put so much effort into, to write and record, may not get a run at all.”

It’s refreshing to hear directly from the band’s leader that the passion for creating new music was as strong as ever during the writing process of a record that’s their seventh in just twelve years. Few Australian bands are as prolific when it comes to releasing music, particularly full-length albums, in an age dominated by labels encouraging artists to chase the streaming algorithm through singles. The result is that Ball Park Music has a shorter album cycle than most, but each record always stands on its own, and Weirder and Weirder is no exception.

Interestingly, Cromack almost balks at the suggestion that Ball Park Music are a prolific band when it comes to songwriting. But surely the band has the songwriting process down to a fine art after over a decade on the scene? “I was actually in the studio recently producing an artist, and they actually asked me some questions about writing. In fact all the writing I do is completely unplanned and unstructured.

“I’ve never done any designated writing trips, I’ve tried to once or twice,” Cromack admits. “But in reality I’m just always open to the idea of a song popping up. I’ve been thinking about a quote that was in Paul Kelly’s book. He said, ‘I knew how to write a song, and I’d write one every day.’ I think that’s a pretty good summary of what it’s like to be a songwriter. You just have to stick at your craft, which to me is less about playing your instrument thinking ‘I’m gonna write something’ and more just like being around music and instruments.”

With several of the songs on Weirder & Weirder having been written during various stages of Australia being locked down and under restrictions, Cromack says he’s only just starting to pull the true meaning from several tracks. Stars In My Eyes is one such example. “When I had to first talk about it [for the media], I felt like I still hadn’t put my finger on exactly what that song meant. Even though I could feel its authenticity, I don’t think I fully yet understood the meaning of the song.

“I wrote that when I went home to see my family around Christmas time at the end of 2020. So we’d just lived through the first year of the pandemic and it felt like a miracle that I could even cross the border and visit my family for Christmas,” he explains, a smile crossing his face again. “I was just going for pure nostalgia and I think it was probably quite literal, right from the opening line: ‘There was a place that I used to go / There was a girl that I loved who lived there.’ I probably wrote that after literally driving down the street where my old girlfriend lived once upon a time. That was just kind of the mindset I was in.”

As tends to happen, the song ended up taking on new meaning, and sums up a lot of the messaging that’s present throughout the record; that being the impact the pandemic has had, and whether it’s even all worth it. “I realised this song is just massively about the toll that the whole pandemic has taken on me, and everyone else,” Cromack says. “Asking that question, do I still have stars in my eyes? It’s just… fucking hell, the world is despairing so much. I think you just want to have some kind of reassurance that the future is worthwhile.”

Another theme that carries through the album is about the disconnect that we all experience as adults, and that sometimes you need to just be present in the moment of your experiences. This is something that Cromack says being in lockdown with his young daughter helped him understand, and is best heard on The Present Moment. “Being a father caused me to do a lot of thinking and a lot of reflecting, it’s definitely been one of the defining features in the last few years,” he reflects.

“Phone and internet addiction is something that is such a common thing I find when I speak to people. So I was trying to run towards addressing the things that I feel, as opposed to running away from them. Children are so present all day, every day, they really are living for the present moment. They don’t use phones, so they’re not even thinking on any other timeline, they can barely understand what tomorrow or next week or next year means. And as an adult, you’re plagued by distractions, sometimes it feels like I’m everywhere except the present moment. I’m worried about things I’ve done in the past… how I behaved at an event, or how I’m going to tackle things in the future.”

So what can audiences expect on the new tour? Ball Park Music are much loved by their fans for setlists that strike a balance of songs released right the way across their extensive catalogue, interspersed with brand new tunes. “We’ll certainly stack the set to favour those two [newer] records,” Cromack teases. “We went to WA to do a festival a couple of weeks ago, and when we got there, we realised; ‘Holy shit. We haven’t played any of the songs off the self-titled record for any of this for any of these people, let alone the brand new songs.’ Moments like that are really catching up on us.”

ARTY releases new single ‘Where Have You Been’: Listen Here