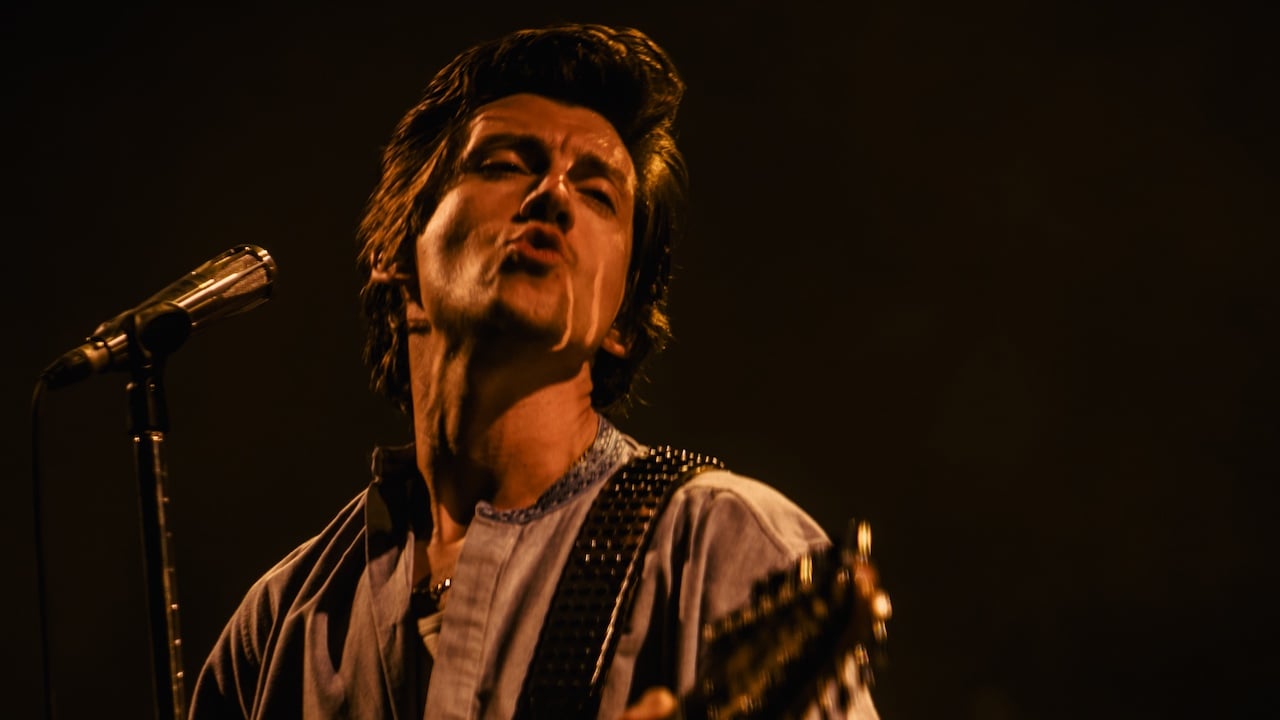 Alex Turner has left the lunar surface and returned to earth. Choosing to disembark ship in full costume, still adorned in the metaphors forged by the confident and self-conscious washed-up lounge singer of Arctic Monkeys‘ last record, Tranquility Base Hotel & Casino. And now, with an orchestra in tow, the band intends to rebuild the Base right here on earth – on a Caribbean Island, or by the beach in Rio.

Jazz percussion, funk guitar and orchestral swoops form the unlikely bedrock for ‘I Ain’t Quite Where I Think I Am’, a homage to Bowie in which the band appears happy to indulge. Turner’s newly minted falsetto flies headlong into the territory of soul, sounding a lot less tethered to his lines’ meter and syllables, now more enthralled by melodic expression.

But that doesn’t mean he’s lost his knack for talking deliciously, as seen in such lines as “Formation displays of affection fly over / Eyes roll back.” It’s just that you might now hear a hint of Al Green at the same time as Al Turner.

The rock of earlier years is almost entirely absent, returning briefly in the refrain of ‘Body Paint’, marking the track as an obvious single. But eschewing the riff-heavy songs is exactly where the band breaks new sonic ground on ‘The Car’, and Turner is driven deeper into his rich world of introspection.

The laid-back wah-wah guitar of ‘Jet Skis On The Moat’ sees decadent leisure slide towards immobilising nostalgia – perhaps an inevitable experience as one transitions out of early adulthood. Once sucked into the slow stirring beauty of ‘Big Ideas’ and filtered through the gossamer guitars of ‘Mr Schwarz’, the multiple personas of Turner’s washed up narrator are strained out. Turner becomes imbued with a sudden sincerity, and we see past the sarcasm.

Arctic Monkeys – ‘I Ain’t Quite Where I Think I Am’

On second spin, these back-end slow burners cast a distinct glow over the lead tracks. The film noir strings of opener ‘There’d Better Be A Mirrorball’ are so emotive they come with a warning: “Don’t get emotional, that ain’t like you.” The lines of the song stripped of their usual poetic density leave Turner vulnerable, wrapped in a cloak of orchestral strings and maybe the thinnest layer of English understatement.

Turner’s interest in film, performance and stagecraft have quietly become an infatuation. Title track ‘The Car’ would make a formidable theme for a moody western. There’s also ruminative and uneasy lines about this “business called show” (‘Hello You’), a “directorial debut” (‘Mr Schwarz’) and scenes shot in “cinema scope” (‘Jet Skis On The Moat’).

Meanwhile, the conceit of ‘Big Ideas’ drags the audience into his self-conscious, psychological maze of meta: “Spotlit, getting lowered in / Can you co-direct and play the twins / And adapt the main theme for mandolins?”

It all serves as a reminder that the “lunar surface” was also the name given to the band’s spare room home studio set up in the hills of LA and inspired by the conspiracy that Stanley Kubrick staged the Apollo moon landing. So, perhaps we aren’t by the beach in Rio. Turner’s simply wandered onto a film set and thrown the band under the penetrating gaze of the camera’s eye, knowing full well how uncomfortable that can be.

Arctic Monkeys’ The Car is out now via Domino Recording Company.