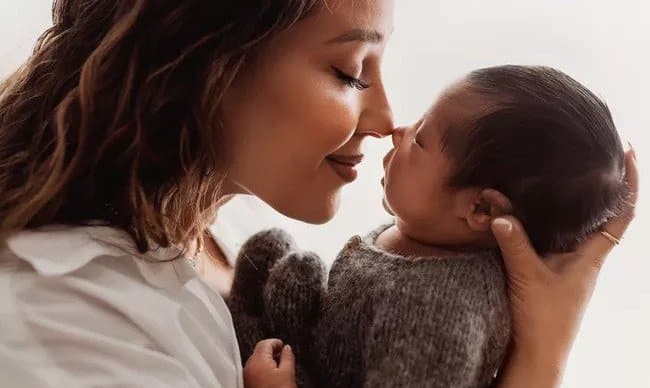 Adrienne Bailon and Israel Houghton made headlines earlier this month after the surprise announcement that they had welcomed their first child together – a baby boy named Ever James – via surrogate.

Now, the former host of The Real and the Gospel singer are giving the world its first glimpse of the youngster via PEOPLE. Bailon also spoke about her journey to motherhood,

Pics and quotes below…

On Keeping The Pregnancy a Secret:

“Honestly, everyone was shocked. Even my sister, who watched The Real throughout the whole last season, literally said to me, ‘Adrienne, I am impressed.’ She’s like, ‘I am so proud of you. You are really holding this.’ I did that because it was really sacred to me.

It was [also] important to me for my own mental wellbeing and for my family. I was just like, ‘I’m just not going to say anything.’ It was actually very peaceful that way. You didn’t have other people’s opinions.”

On Going the Surrogacy Route After 8 Failed IVF Attempts and a Miscarriage:

“I got to be honest, even the process of surrogacy can be quite nerve-wracking. Somebody else has your child with them. We call it extreme babysitting for nine months. It can cause you to be really anxious. You’re just thinking, ‘Oh, is everything going okay? What’s happening?’ I feel like having people ask me, ‘How’s everything going?’ That was going to make me that much more anxious, so I just wanted to have peace and have a little joy that I could hold for myself every day and something to look forward to.”

On the Birth of Ever James:

“It’s an absolute miracle. The birthing experience was incredible. We had multiple doulas. I had a doula for me. She had a doula for her that looked after her for aftercare. Same for me, someone that was there for me emotionally, anything that I needed physically. It was a family affair and absolutely beautiful.”

On Finding Out She Has Five Embryos Left After Initially Thinking She Didn’t Have Any More:

“That’s the ultimate dream for me [carrying a baby herself]. I’m not giving up on that dream. Maybe I will carry one day and I can’t wait for that. I’m still hoping for that.”